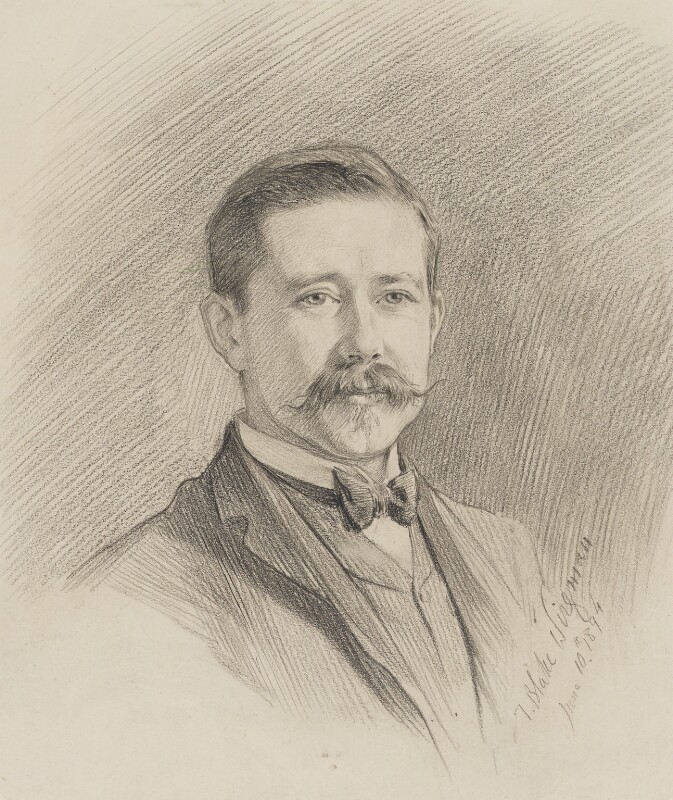 This portrait drawing was executed in 1894 for reproduction in the Graphic, at a time when the sitter was in the news owing to his involvement in British colonial expansion in the central African territories now comprising Zambia and Malawi. In 1891 he had been appointed commissioner for territories under British influence north of the Zambezi river, part-subsidized by the British South Africa Company. Using Sikh and Zanzibari soldiers, Johnston concentrated efforts on the Shire highlands and Lake Nyasa. In 1894, his finances exhausted and having quarrelled with Cecil Rhodes, he obtained new funding from the British government, recruited more troops from India and subsequently led a campaign to subjugate African populations in the north of what is now Malawi, offering ‘protection’ in exchange. Appointment as KCB followed in January 1896 but career advancement was blocked.

During 1894, Johnston was commended by the Royal Zoological Society for his contributions to knowledge of animal and bird species in the region,[1] and while in Britain ‘frequently lectured on the subject of central Africa’.[2] The content of his lectures may be judged from a report in the Graphic describing the ‘punitive expedition’ he had led ‘to avenge an attack made by a chief M’Kande who declined to pay his taxes’. The article claimed that the expedition had ‘added greatly to British prestige in the district’ by resulting in the death of ‘a famous slave-raider’ and the installation of ‘a friendly native as paramount chief on the western side of Lake Nyassa’.[3]

The wider political context to this relatively minor event is given in a contemporary paragraph, comparing ‘the Dark Continent [Africa]’ to a dying traveller assailed by vultures: ‘The European Powers are struggling for the biggest slice, the French bird determined to fix its claws tight into the booty lest it should be pushed aside by its British rival.’[4] Johnston’s exploits no doubt suggested too that he would soon become as renowned as Rhodes and other imperial agents in Africa. (It seems likely that Harry Furniss’s caricature NPG 3473 dates from around the same time as the present portrait.) Indeed, a couple of months after Wirgman’s drawing was made, Johnston presented to Parliament his report ‘on the first three years’ administration of the Eastern portion of British Central Africa’, which was eagerly read by the public and has been described as ‘remarkable among state papers for the detached and thought-provoking discussion of the problems of pioneer colonization’.[5] Later in the year he was reprimanded by the Foreign Office for his more provocative public lectures, which alleged that slavery was tolerated in French, Portuguese and German colonies.

Theodore Blake Wirgman was described as ‘an artist friend’ of the sitter[6] and the two may have been acquainted through the Volunteer Movement; Wirgman was a contemporary member of the Artists’ Rifles (see also (William) Hamo Thornycroft) who specialized in portraits ‘from life’ for the Graphic. A further seven portraits by Wirgman are in the National Portrait Gallery collection. This drawing was done on 10 June 1894 and was published in engraved form five days later, over the title ‘Mr H.H. Johnston, C.B., H.M. Commissioner and Consul-General in British Central Africa, now on a visit to England. / Drawn from life by T. Blake Wirgman’.[7] It depicts Johnston in his mid-thirties, as a youthful clubman in formal attire, sporting the long moustache of the period, which he retained in later years. The depiction is notable for its urbanity and absence of contextualizing accessories, indicating that Johnston’s name and exploits, which today are all but forgotten, were then well known to the British public.

The drawing was formerly behind an oval mount that has discoloured the support. It is presumed that it was presented by the artist to the sitter, and on his death passed to his brother Philip M. Johnston FRIBA, by whom it was given to the NPG in October 1936. This came about following negotiations between the Gallery and the executor of Johnston’s widow in 1933, when Henry Pegram’s plaster bust of Johnston (see ‘All known portraits, Paintings, drawings, sculptures and prints, 1904’) was offered to the Gallery.[8] The bust was duly considered by the Trustees in October 1933, when a decision was ‘postponed’ for further inquiries, which involved consultation with Lord and Lady Boston (brother and sister-in-law of Johnston’s widow) and led to correspondence with Philip Johnston. He wrote on 4 April 1935 to say he had spoken with the Bostons ‘who think a black and white drawing by an artist friend might have been left to a nephew by Lady Johnston – I believe I have seen such a sketch.’[9] A week later he reported that he had found the chalk (sic) drawing by Wirgman dated 10 June 1894 – ‘taken at the age of 36 … during the period of his greatest activities in Africa. If you care to have it you are welcome.’[10]

In April 1935 the drawing was delivered and considered by the Trustees, who again reached no formal decision and the matter lapsed until October 1936 when Philip Johnston was informed of its acceptance.[11] By this date the NPG had declined Pegram’s bust, suggesting it be offered instead to the Royal Geographical Society; however, it remained at the Gallery until October 1937 when it was delivered to the Royal African Society.

Probably the sitter; his brother Philip M Johnston, by whom given in 1936.