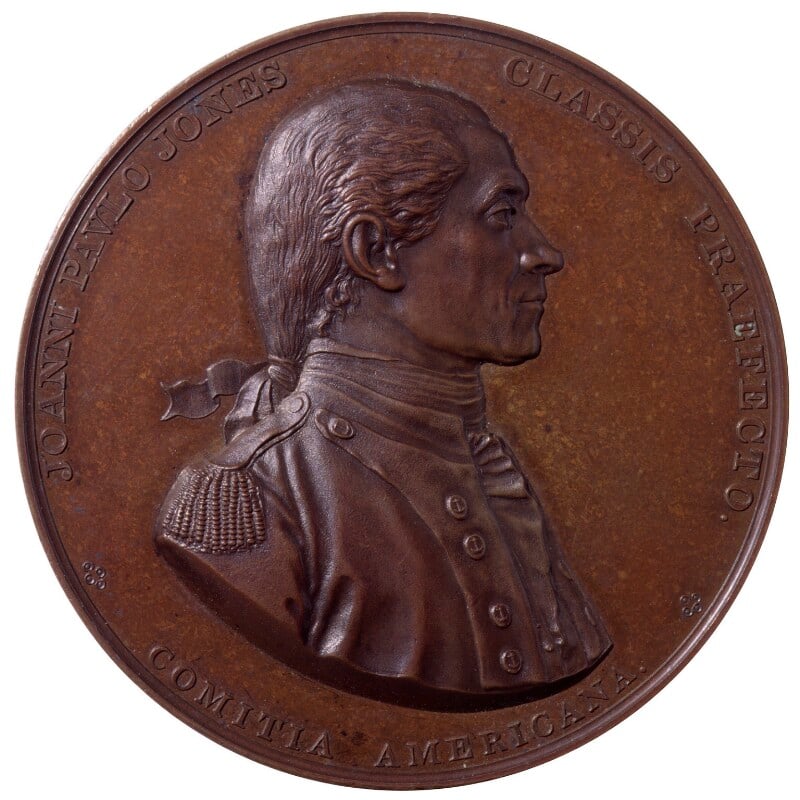 In July 1787 the American Congress voted that a medal in gold be struck and presented to the Chevalier John Paul Jones ‘in commemoration of the valour and brilliant services of that Officer’. Jefferson in Paris was directed to commission it, [1] but it was not until 13 February 1789 that he ordered from Dupré 350 examples ‘en or, argent ou bronze’ to be ready by 15 April 1789. [2] On 23 March he told Jones his medal would be done during the summer and the distribution would be: ‘one of gold or silver (as the case may be) to the person who is the subject ... one of silver to every sovereign and one of copper to every university of Europe (Gr. Britain excepted) 200 copies to Congress and one apeice to La Fayette, Rochambeau, Destaing, and Degrasse’. [3] Jones had previously written to Jefferson from Russia on 29 August/9 September 1788 saying, with customary bravado, that he would want ‘four Gold Medals as soon as the Dies are finished. I must present one to the United-States, another to the King of France, and I cannot do less than offer one to the Empress [Catherine of Russia]. As you will keep the Dies for me, it is my intention to have some more Gold Medals struck; therefore I beg you, in the mean time not to permit the striking of a single Silver or Copper Medal’. [4]
Dupré took Jones’s likeness from Houdon’s bust and his preparatory drawing is at Blérancourt. [5] For the reverse, he was sent an engraving of the celebrated action of September 1779 when Jones in the Bonhomme Richard successfully engaged the British man o’war Serapis off Flamborough Head; the engraving was apparently made from a wax by Reynaud, [6] though it also much resembles the print of the battle by Lerpinière and Fittler after Richard Paton. [7] For the inscription Jefferson had consulted the Académie Royale [8] who allowed one error, Flamborough Head not being off the coast of Scotland. The dies remain in the hôtel de la Monnaie and were used to make a fresh strike in gold for the chapel crypt in Annapolis MD, near Jones’s body. [9]
A Wedgwood medallion was cast from the obverse in 1906; [10] a very similar wax profile attributed to the otherwise unrecorded ‘Capri’, was sold Bonham’s, 14 June 2000, lot 136, and a variant in the Boston Public Library has been described as a study for the medal by Dupré. [11]

1 When accepted by the Trustees for the reference collection.