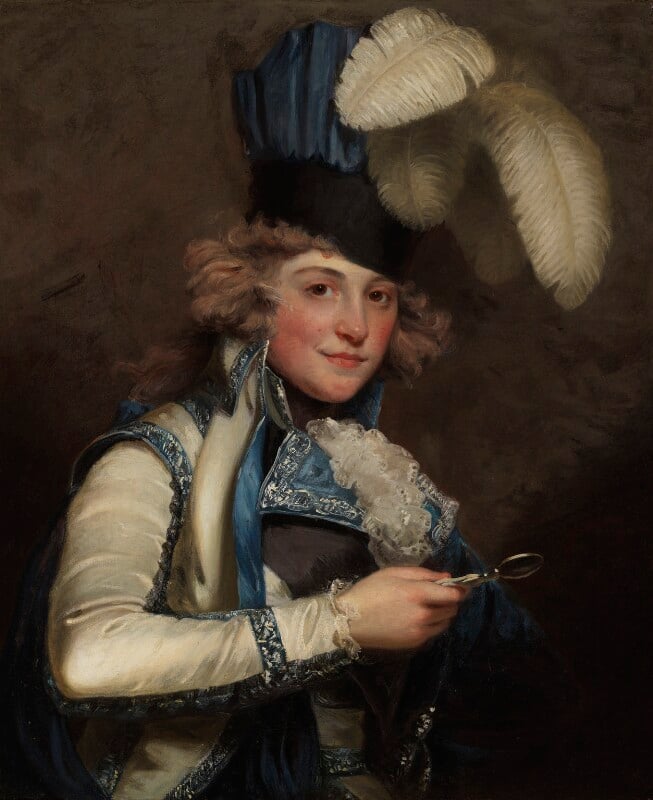 The portrait shows Mrs Jordan in male attire in one of her famous 'breeches' parts as 'Hypolita' in Colley Cibber's She Would And She Would Not, played by her in London in 1785 and Edinburgh and Glasgow 1786. The Rev John Genest in Some Account of the English Stage, 1830 says that her 'Hypolita' will never be excelled. Hoppner paints her in the bravura of her masculine disguise without in the least abandoning her buxom feminine allure. Her cheeks are heavily rouged to indicate the ruddiness of the young man she pretends to be as she follows her lover Don Philip to Madrid.
W. McKay & W. Roberts, John Hoppner R.A. lists six Hoppner portraits of Mrs Jordan:
(1) exhibited RA 1786 (163), as the 'Comic Muse', now in the Royal Collection (Sir Oliver Millar, The Later Georgian Pictures in the Collection of Her Majesty The Queen, 1969, 844), mezzotint by Thomas Park 1787 reproduced in Connoisseur XXVI, p 148.
(2) exhibited RA 1791 (440) as 'Hypolita', NPG L174.
(3) half-length in low-cut crimson dress, formerly in Sir Henry Irving's Lyceum Theatre collection, exhibited Berlin 1903 (23) and Sedelmeyer sale Paris 1907.
(4) possibly RA 1796 (81), three-quarter-length in white dress holding satchel, Stotesbury sale, Sotheby Parke-Bernet 18 November 1944 and with French & Co Inc, NY 1953, reproduced in colour in Connoisseur CXXXI, 1953, January frontispiece.
(5) half-length in black and grey dress, exhibited St Louis Art Museum, July-November 1913.
(6) three-quarter-length c.1785-6 at Kenwood, in military uniform as 'Viola' in Twelfth Night, engraved in stipple by H. Cook 1832 (listed in W. McKay & W. Roberts, John Hoppner R.A., p 120 as Mrs Goodall and reproduced in Brian Fothergill, Mrs Jordan Portrait of an Actress, 1965, p 224).
Unrelated to any of these is a drawing c.1785 at the National Physical Laboratory, Bushy House, head and shoulders in hat with ostrich plume (GAC 4934).
The NPG portrait, painted when Mrs Jordan was aged 29 and at the height of her fame, came into the Errol family possibly as a wedding present when her daughter Elizabeth FitzClarence married the Earl of Errol on 4 December 1820. The young couple were both aged 19 but Mrs Jordan had died 4 years before. A miniature copy ascribed to Louisa Stuart Costello was at Sotheby's 14 December 1981 (146).

? the Hon Elizabeth FitzClarence; the Earl of Errol and bought from him by Colnaghi; Sir Edward Stern; part of the Stern bequest to the National Gallery, transferred to the Tate Gallery and the NPG 1979.