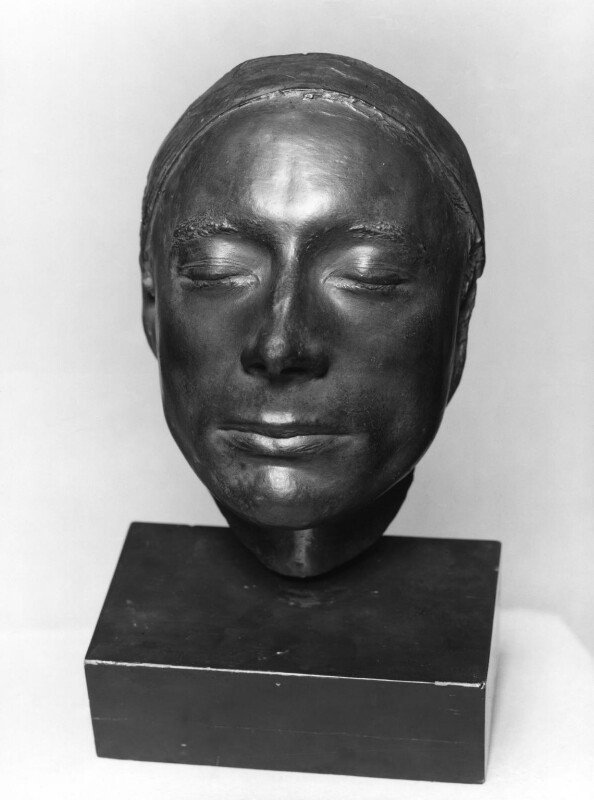 Keats and Haydon became close friends in 1816 and Haydon used Keats's profile among the onlookers in 'Christ's Entry into Jerusalem' begun that year. It is likely that the mask was made, probably by Haydon himself, in about December. It is mentioned by Keats in a letter to Cowden Clarke dated 17 December 1816: 'You may now look at Minerva's Aegis with impunity, seeing that my awful visage did not turn you into a John Doree you have accordingly a legitimate title to a Copy - I will use my influence to procure it for you' (Letters of John Keats, ed. Rollins, 1958, I, p 121). Other friends were anxious to have copies. In a letter to Benjamin Bailey, Keats writes, 'I have not been well enough to stand the chance of a Wet night and so have not seen him [Haydon] nor been able to expurgatorise those Masks for you.' (Letters of John Keats, ed. Rollins, 1958, I, pp 170 and 174).
Modern biographers have claimed this mask as one of the best portraits of Keats: '... an accurate template to which all past and present representations of the poet must in the main conform' (Donald Parson, Portraits of Keats, 1954, p 33); 'a true representation of the real face of Keats' (F. N. Doubleday, The Portraiture of John Keats, Guy's Hospital, 1955, p 96); 'Brown's drawing … probably the best we have except for Haydon's life-mask' (W. J. Bate, John Keats, 1964, p 563); 'the ideal figure-head for the finest of his poetry' (David Piper, The Image of the Poet, 1982, p 118). However life-masks are notoriously fallible and moreover a NPG report dated 23 September 1915 described it as having 'everywhere lost its surface and many details as well - possibly the surface had been friable and was damaged when the electrotype was taken' (registered packet 686b in NPG archive). A comparison made in the NPG at this time between this cast, the electrotype replica and a Brucciani cast came down heavily in favour of the electrotype.
Other casts are in Keats House (Dilke's, Forman's and Storr's), a private collection in Oxford (Severn's), the Keats-Shelley Memorial House in Rome, and Harvard University. Domenico Brucciani is believed to have made about 200 casts.