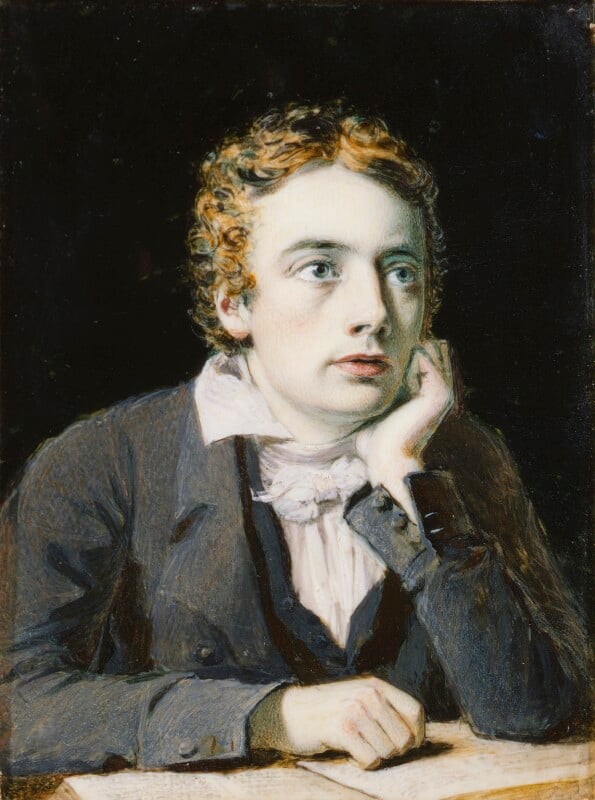 Inscribed in Severn's hand on the original card backing (in registered packet 1605): not lett any thing touch the Picture.

The miniature when received from Dilke's executors in 1911 contained an extra sheet of glass on the back, on which was pasted a scrap of brown paper written on in ink: ever yours affectionately/John Keats (now in NPG autograph collection). It was accompanied by Dilke's bookplate written on in ink: John Keats by Severn (was in the Art Treasures Exhibition) This is the original & only one done from Keats, and a small paper disc printed with: The/Property of/Sir Charles W. Dilke,/76 Sloane St./Catalogue/No. 543. However a letter from Dilke in the NPG archive distinguishes the watercolour original (now in the Fitzwilliam Museum) from the NPG and other copies: '76 Sloane Street SW. 25 Feb: 1878 My dear Sir, I have a long letter from Severn about the Keats portraits, in which he denies that he painted any of those ascribed to him except the two in my possession, viz: the watercolour on Ivory original done from Keats himself for Miss Brawne, which was bought by my Grandfather from Miss Brawne, & the oil duplicate of the same painted long afterwards for Moxon, which latter I obtained by exchange from Locker. Yrs very truly Charles W. Dilke.'
The original watercolour miniature was painted late in 1818 or early 1819 and exhibited RA 1819 (940) against Keats's advice (letter to Severn 29 March 1819 and William Sharp, Life and Letters of Joseph Severn, 1892, pp 34¬5). It was given to Fanny Brawne and years later sold by her (by then Mrs Louis Lindon) to Charles Dilke whose grandson, Sir Charles Wentworth Dilke, bequeathed it to the Fitzwilliam Museum. Donald Parson, Portraits of Keats, 1954, p 53) describes it as a copy but in view of the slightly confusing account by Dilke himself, quoted above, it would seem that the Fitzwilliam version is the original. This is certainly painted in watercolour on ivory over a pencil outline and is framed with a lock of Keats's hair. Dilke returned to the subject in 1895-6 when a claim was made that the original miniature had been taken to America by George Keats (Notes & Queries, 14 December 1895, p 470) ; Dilke quoted Severn's letters again and was able to refute the claim; the correspondence and Buxton Forman's comments are republished in Donald Parson, Portraits of Keats, 1954, pp 45-9).
George Keats's copy was painted on kid leather and last heard of in 1906, the property of George C. Thomas; an oil copy in the Keats-Shelley Memorial House, Rome was bequeathed by Dilke and also said to have belonged to Fanny Brawne; an oil copy formerly belonging to Jane Reynolds (later Mrs Thomas Hood) is in Keats House (38); an India ink copy by Brown c.1820 in Keats House belonged to Brown's granddaughter Mrs Osborne; a crayon copy said to have been made for John Taylor is in the Pierpont Morgan Library, New York; a grey wash copy by Ann Mary Severn (daughter) was at Sotheby's (printed books) 20 July 1976 (432).
Severn used the miniature for several later variants, which he continued to produce for years afterwards, for instance the Houghton-Crewe whole length in the Vaughan Library, Harrow School, the so-called 'Lost Portrait' formerly in the Rev Hew Severn's collection (in Donald Parson, Portraits of Keats, 1954, plate 48), and the charcoal drawing at Harvard (in Donald Parson, Portraits of Keats, 1954, plate 51).

A copy painted for Edward Moxon; Frederick Locker and 'obtained from him by exchange' by Sir Charles Dilke whose executors lent it to the NPG in 1911, changing the loan to a gift in 1919.