14 of 422 portraits matching these criteria: 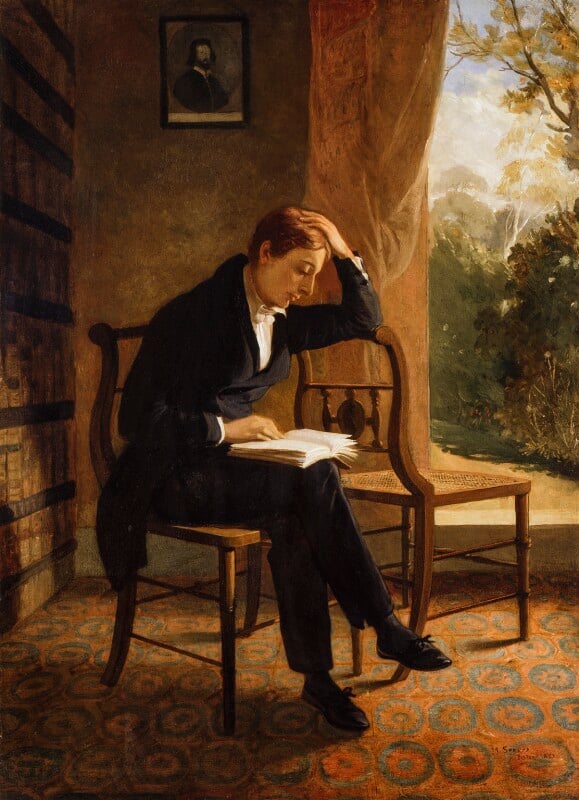 The portrait is one of many painted by Severn in Rome after Keats's death in his arms on 23 February 1821. It is probably the first of the type painted from memory with the help of the death-mask (and perhaps Haydon's life-mask) and showing the poet composing in his study. Its origins are described in a letter from Severn to Scharf in the NPG archive: '83a Eccleston Sqr Dec 22 [? 1859] Dear Sir, The portrait of Keats (from Mr Smith Travers) is the original one done by me in the Autumn of 1821 at Rome - after the death of Keats the impression was so painfull on my mind that I made an effort to call up the most pleasant remembrance in this picture which is posthumous. This was the time he first fell ill & had written the Ode to the Nightingale (1819) on the mor. of my visit to Hampstead I found him sitting with the two chairs as I have painted him & was struck with the first real symptoms of sadness in Keats so finely expressed in that Poem. (The room, the open window, the carpet and chairs are all exact portraits, even to the mezzotint portrait of Shakespeare given him by his old landlady in the Isle of Wight. After this time he lost his cheerfulness & I never saw him like himself again -). I had a drawg of the room, chairs &c done by Mr Charles Brown who was still living in the same house./During life I had done two portraits of Keats (both engraved) but not entire figures./This little picture was sold to Mr Travers on the condition that I should be permitted to use it in doing another picture with some important changes such as the open eye & raised up from the book &c...'
Charles Brown's drawing of the room and its furniture seems to have been accurate enough though the mezzotint hanging on the wall does not correspond exactly to any authentic portrait of Shakespeare. It is probably Brown's free interpretation of an 18th century mezzotint by John Simon of the so-called 'Soest Portrait' (John Chaloner Smith, British Mezzotint Portraits, 133). In spite of Severn's statement to Scharf that the picture was painted in the autumn of 1821, and the date 1821 on the canvas, there is evidence to show that it was not finished to Severn's satisfaction until 1822 or even 1823. It was begun in May 1821: 'I have begun a small whole length of him - from last seeing him at Hampstead' (letter to Taylor 16 May 1821, Keats Circle, I, p 249), and was still under way in January 1822: 'The picture is not completed - I cannot finish it to please me - without the mask [probably the life-mask] I have seen at your House …' (ibid., p 128). Severn wrote to both his father and Brown in December saying he hoped to have it ready for exhibition in London the next summer so it was probably finished then, though there is no record of its being exhibited.
The picture was exhibited several times by Severn, with the eyes looking upwards as mentioned in his letter to Scharf. These were followed by a trio of romantic evocations, 'Keats listening to the Nightingale' now in Keats House, 'Shelley in the Baths of Caracalla' in Keats-Shelley Memorial House, Rome (with a copy in Lord Abinger's collection), and 'Byron reciting Childe Harold in the Forum', destroyed in about 1950.
Copies: A copy is in a private collection London; a copy by Linnell, painted in 1834 for William Empson, was in Miss Watt Chesterfield's collection in 1917, showing Keats with eyes open looking upwards; a watercolour replica of this in the Vaughan Library, Harrow School, is known as the Houghton-Crewe version and was used by Buxton Forman for the frontispiece to his 1906 edition of Keats's Works; a copy by Dyer in Keats House is inscribed: Edmund Dyer/after/Joseph Severn/in/NPG and given by the Vahil family of Bombay in memory of Behram A. Vahil in 1933. Other copies exist.