3 of 31 portraits matching these criteria: 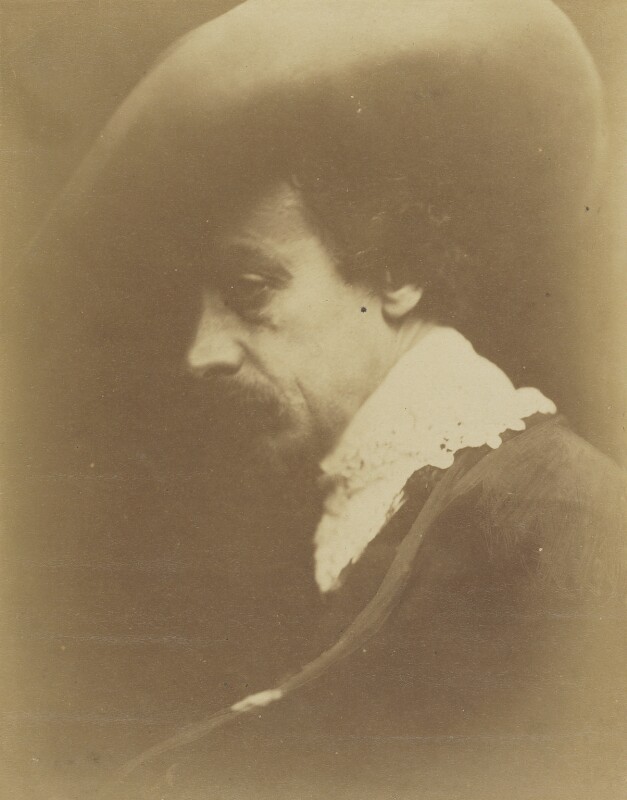 This image was created during the 1860s for David Wilkie Wynfield’s series of photographic portraits of artists in historical and contemporary costume, many of which were released for sale from March 1864 under the title The Studio: A Collection of Photographic Portraits of Living Artists, taken in the style of the Old Masters, by an Amateur. Keene’s portrait appeared in Part 5, ‘After the Flemish Schools’.[1] Given his aversion to commercial photographic studios it was probably the originality of Wynfield’s scheme, admiration of prints from earlier sets and (Myles) Birket Foster’s participation which encouraged Keene to sit for the series. Neither he nor Foster was a member of the St John’s Wood Clique from which the majority of Wynfield’s sitters were drawn.

Two images resulted from this sitting: a profile to left with hat (as in NPG P76 and NPG P92), and another facing the opposite direction and bare-headed (only known print RA, London, 03/6940). In the NPG prints Keene wears a broad-brimmed hat, lace collar and dark cloak.[2] The Flemish set was designed ‘for Rembrandtesque effects’ and the costume, especially the angle of the turned-up hat, appears to be a deliberate reference to Rubens’s self-portrait bust in the Royal Collection – the standard Rubens likeness, it would have been familiar from prints and copies.[3] But the historicism and moodiness that characterize the Keene images place Wynfield’s work firmly in the contemporary, nineteenth century. The hat casts shadows over the face and makes it one of the more inscrutable, least readable of the series. Wynfield did not use this particular costume prop with other sitters.[4]

It is assumed, without the means to prove it, that the image with the hat, the more ‘painterly’ of the two poses, was the one issued in The Studio. There are certainly more extant prints of this pose.[5]

Note the retouching on the (untraced) negative, very visible on NPG P76, with pale dry brushstrokes on the sitter’s left shoulder and the line of the cloak painted in. This effect is less visible on NPG P92.

Like others at the time, Keene experimented with photography. He wrote to Joseph Crawhall in 1887:

I’m seriously thinking of going in for photography. The only thing that stops me is the difficulty of contriving a dark closet to develop in at home. My idea is, to work with a small detective camera, and to enlarge from these small negatives […] I’ve one or two friends first-rate workmen at it. It is so easy now, compared with the old collodion process that I used to slave at.[6]

1) As well as Keene the other sitters in the Flemish set were the engraver Thomas Oldham Barlow (NPG P71, NPG P90), the history painter William Gale (NPG P100) and Keene’s close friend the watercolourist (Myles) Birket Foster (NPG P99).
2) The Flemish lace collar is also worn by William Gale in the same series.
3) Hacking 1998, p.225 connects the type with Rembrandt. See also a similar broad-brimmed hat worn by Charles I in Van Dyck’s Charles I in the Hunting-Field; Louvre, Paris. For the Rubens self-portrait see C. White, The Later Flemish Pictures in the Collection of Her Majesty the Queen, London, 2007, no.61.
4) D.W. Wynfield changed the spelling of his name from Winfield perhaps to avoid confusion with the painter James Digman Wingfield, who shared a studio with Keene 1856–63.
5) However, the bare-headed version was chosen for the frontispiece for Lindsay 1934. For other prints of the pose with hat, see RA, London, 03/5752; V&A, London, 132A-1945; and The Rob Dickins Coll., Watts G., Compton, COMWG2008.975. See also Victorian Worthies, Christopher Wood Ltd at Alexander G., July 1976 (4, handlist only) for a photograph of Keene by Wynfield for sale at £120.
6) Letter from C. Keene to J. Crawhall, Sept. [1887]; Layard 1892, pp.388–9.