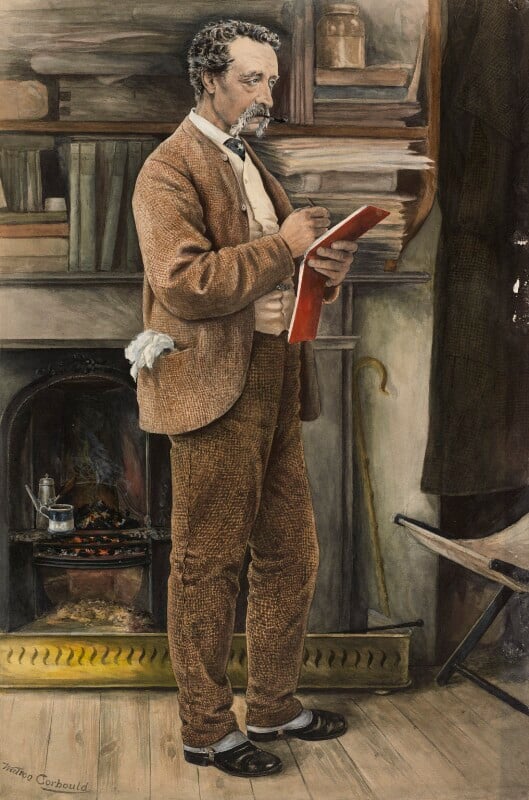 Walton Corbould was Keene’s nephew, the son of his eldest sister Mary and the artist Alfred Hitchens Corbould (fl. 1844–64). He was not formally trained but worked as an illustrator for the News of the World ‘and similar papers’. [1] A note on file for NPG 1337 indicates ‘[Corbould] did the drawing of the head from a photograph & from long personal & intimate acquaintance with his uncle. The rest of the figure was done from clothes usually worn by Keene & the room was part of Keene’s studio.’ [2]

The sitter is not instantly recognizable in this large and detailed drawing. This is partly because Keene’s looks changed with ill-health; the ‘jet black curly hair’ turned grey; and he shunned publicity, so that there are relatively few images of him in later life. For the photographs Corbould might have used here, see ‘All known portraits’, especially the 1882 photograph (coll. S.G.A. Glasson), and the print of an aged-looking Keene in a garden (Getty Images, 5070085). NPG 1337, essentially a reproductive image, is almost certainly posthumous.

He rarely wore a black coat, his clothes (of which he always had several suits) being made of Cheviot [tweed] or other coloured material. I don’t think I ever saw him in a silk hat – always a ‘billycock’ or ‘wide-awake’. Very particular about his boots, which he had from a first-rate West-end maker. He often carried a bag slung over his shoulders with a leathern strap. He never carried an umbrella however inclement the weather might be, often getting wet through two or three times a day. [3]

See the spats, the long tweed coat hung at right and the shepherd’s crook walking stick in NPG 1337.

The portrait was offered as a gift to the National Portrait Gallery by Thomas G. Bain of 14 Charles Street, Haymarket, London, in January 1903, twelve years after Keene’s death.

Whole-length, standing and looking to right, with red sketchbook, small pipe clamped in mouth; behind, a brass fender, a coffee pot warming on the grate, and mantelpiece stacked with books and papers.