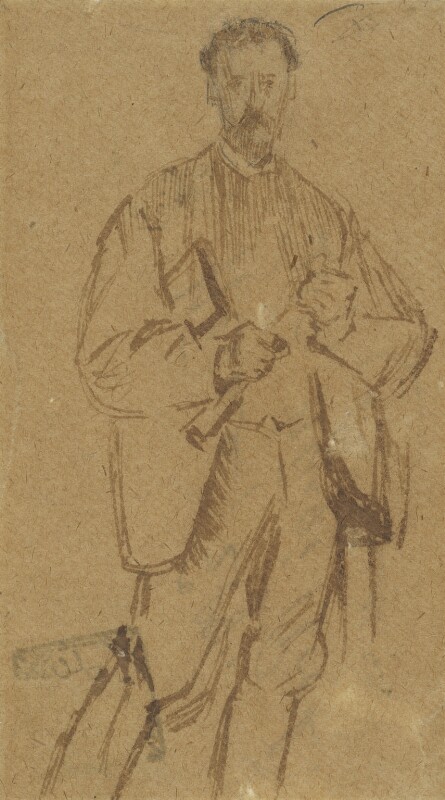 This self-portrait was apparently taken in front of the whole-length mirror Keene used for working out poses:

…in his Strand studio a prominent object was the large cheval glass, before which he would pose as his own model, and, after his death, large parcels of these studies, done chiefly upon the insides of old envelopes which he had treasured up for the purpose, were found among his papers. Any envelopes would not do, and he chiefly affected certain brown coloured ones which he received in correspondence with Mr. Swain. [1]

Joseph Swain was the wood-engraver charged with the task of translating Keene’s subtle drawings into engravings for Punch. He wrote that Keene ‘had the strongest aversion to drawing-paper or Bristol boards, preferring any scrap, even a half sheet of notepaper, with a rough grain and coloured by age’. It was impossible, he said ‘for any one unacquainted with his method to ascertain the means by which he obtained his effects’; Keene also mixed his own inks. [2] The postmark has bled through and appears at the lower left of this drawing.

For other self-portraits drawn in brown ink on fibrous brown paper, showing Keene wearing a similar costume of knee breeches/gaiters, see Tate, N04370 (1884) and N03611. For a good range of self-portrait sketches see the collections of the Tate and National Gallery of Victoria, Melbourne. [3]

This drawing was part of the portrait collection built up by the art historian and journalist Marion Harry Spielmann. It was no.28 in the ‘illustrated catalogue’ or inventory he kept of his collection. [4] In August 1935, eleven drawings, including NPG 2817, were selected for acquisition by the National Portrait Gallery and the purchase was finalized in April 1936. [5]

Nearly whole-length, standing, full-face, holding ?roll of paper in both hands, a book under his right arm.