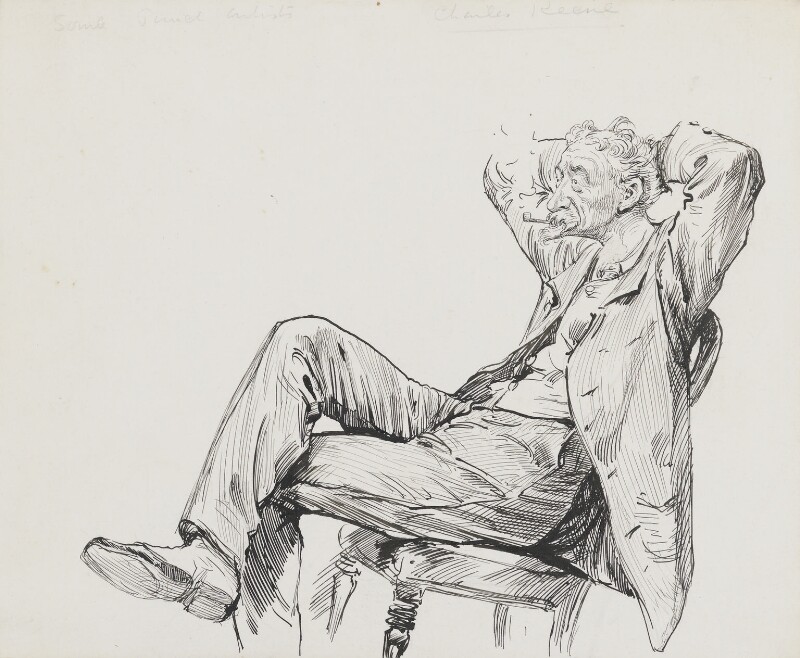 Inscr. in pencil at top: ‘Some Punch artists’;
and ‘Charles Keene’.

Furniss’s first impression of Keene, with his black gloves and ‘favourite dirty Charles the First pipe’ was recorded in two quick sketches during a Punch staff dinner in 1881 (see ‘All known portraits, By other artists, 1881’). [1] He thought him the oddest figure even in that company of humourists and eccentrics. [2]

Harry Furniss belonged to the next generation of Punch artists. He worked on the magazine from 1880 to 1894, mainly as a political caricaturist. Keene’s last contribution to the magazine was in August 1890. Keene avoided the animated weekly editorial dinners and when he did attend ‘spoke very little, and was apt to throw cold water on projects under discussion’. [3] It is this elderly, untidy and morose aspect, exaggerated to trampishness, that Furniss chose to bring out in his caricatures of Keene. NPG 3476 is particularly life-like and both it and NPG 3477 may belong to the late 1880s when Keene was still about and working.

On learning that Keene had died on 4 January 1891, Furniss wrote to the Punch historian Marion Harry Spielmann: 'Dear old CK has gone! I believe it is your pen that has told me this sad news in tonight's P.M.G. [Pall Mall Gazette] [...] I always think of him with his hands behind his head while balancing his chair backwards – puffing at his little clay, with his tea brewing on the hob.'[4] NPG 3476 is inscribed ‘Some Punch artists’, suggesting it was intended for publication, part of some undeveloped project. [5]