3 of 19 portraits of William Lloyd 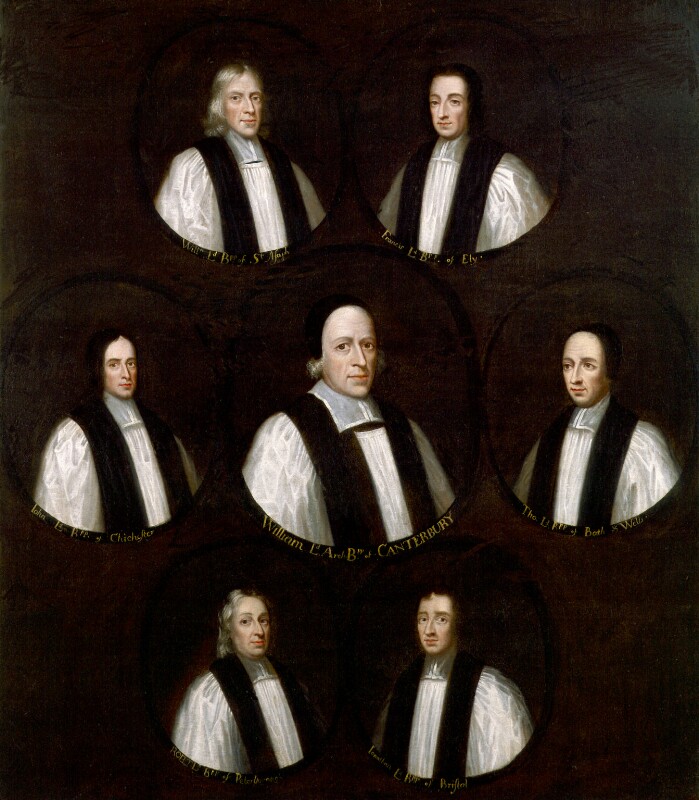 One of the many images celebrating the resolution of those seven Bishops who, under Archbishop Sancroft’s leadership, petitioned James II to withdraw the second Declaration of Indulgence. Refusing to read it out in their churches, they were imprisoned on 8 June 1688 in the Tower and brought to trial, but pronounced not guilty on 15 June. Public celebration was enthusiastic and provided ‘one of the few occasions on which bishops have been treated as popular heroes’. [1] Five of the Bishops (Sancroft, Ken, Lake, Turner and White), the Non-Jurors, remained loyal to the Divine Right of succession to the throne and declined to take the oath of allegiance to William III and Mary.
NPG 79 is a crude copy of the print by J. Drapentier, with identical lettering, except in the name of Thomas White. Fourteen prints of the Seven Bishops are listed in the British Museum [2]. Possibly the best was that drawn (except for the head of Lake copied from Mary Beale) and engraved by David Loggan. See NPG 152a.
The many versions in oil include those in the Palace of Westminster (189; with Thomas White’s name correctly inscribed), and in St Andrew’s College, Selly Oak, Birmingham. [3]

1 Provenance taken from a letter dated 1 June 1859 from James Adams to his son George Adams and a letter from George Adams to Scharf dated 26 May 1859 (both on file).