3 of 8 portraits of William Kent 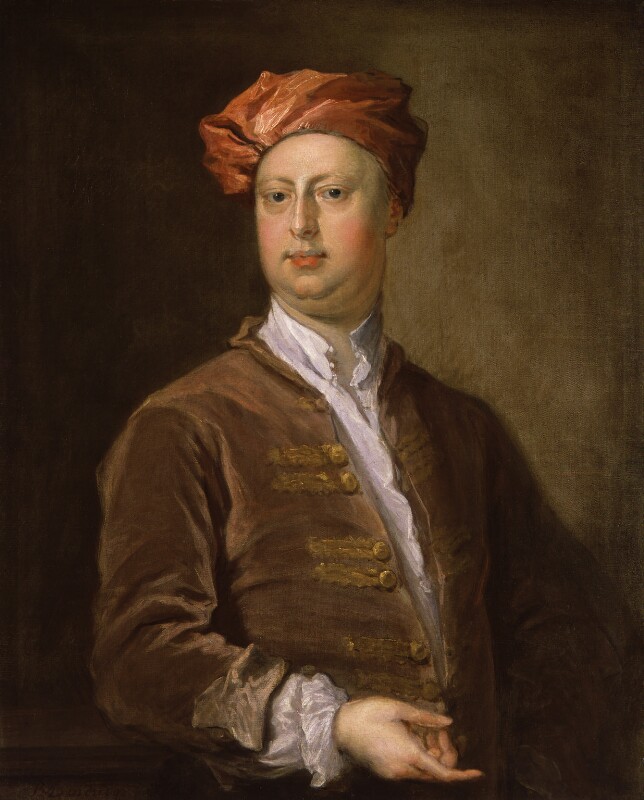 Signed on the masonry B Dandridge; on the back of the relining stretcher, top left, is a label perhaps fifty years old, on which is written W. Kent/By Dandridge; also a label: 221 (dealer's stock number?).

NPG 1557 is the smaller of two signed versions by Dandridge, both with Shepherd Brothers of King Street in 1909. The larger, a 50 x 40 in a 'Kent' frame, last noticed in 1910 at 31 Old Burlington Street when reproduced in the Connoisseur, [1] includes a book, a plan and a monument in the background. It is signed on the masonry, lower left. The plan (a terraced house?) is unidentified. The book is not lettered but the size would be compatible with, say, Leoni's Palladio. [2] The monument, it is now suggested, is a simplified representation of Kent's pyramidal monument to Congreve at Stowe, 1736, reproduced in Bickham's Beauties of Stowe, 1750. [3] Other claims made in the 1910 account cannot be fully substantiated. For example, although of the period, there is no documentary evidence for attributing the carved frame to Kent. [4] Nor can the picture be firmly equated with the portrait mentioned by Mrs Lybbe Powys in her diary for 1771 at Wanstead House, [5] possibly the same noted there by Lysons in 1796 [6] and lot 365, described as Kent, when the house was pulled down in 1822. [7] Nevertheless, comparison with authentic likenesses is plausible and the identification of NPG 1557 as Kent is now provisionally accepted.

Grey eyebrows, dark blue eyes, double chin, bluish temple, upper lip and chin; rich red velvet cap, white shirt open at neck, brown velvet coat with gold frogged buttonholes in pairs, red cuff of his right arm folded back to reveal white wrist ruffle; his right elbow rests on a masonry ledge, the left arm indistinct as also a buttonhole sketched in at the neck of the coat, suggesting the picture may not be quite finished; plain brown background, darker on left.