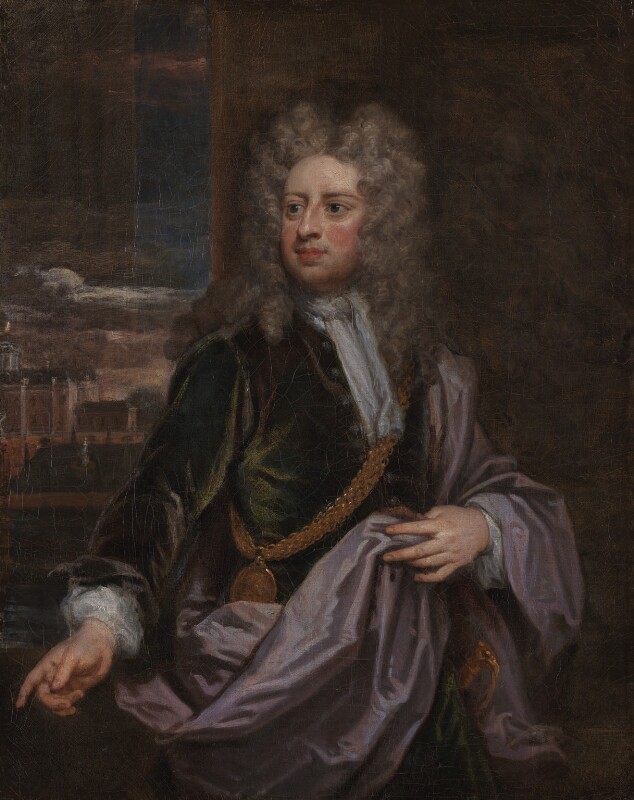 Although not of the kit-cat size, listed hanging among the Kit-Cat portraits from 1735 and Faber’s mezzotint of that date prefixed his Kit-Cat series. Tonson, with good reason, had very cordial relations with Kneller, [1] but Lynch stated that Kneller was considered a member of the Kit-Cat Club only by courtesy. [2]
Kneller advertises his success. His country house, Whitton (built c.1703 [3]) appears behind him on the left; he wears a sword (presumably that given him by the King in 1692) and a gold chain with a medal stamped with William’s image, given him by the King in 1699. In the background (which is now quite obscure, but is clear on Faber’s mezzotint) an allegorical relief shows Mercury reclining on a cloud, a trumpet in his right hand, holding the reins of Pegasus with his left and looking down at Cupid who paints, a palette by his side - a motif interpreted by Stewart (1971) as meaning ‘the love and practice of painting is a path to virtue’.
NPG 3214 is a reduced version of the three-quarter-length sent to Duke Cosimo III, at his request, in 1706 (Uffizi A488) [4] which, however, shows a different background: to the right a cippus with a medallion inscribed above Linea et Lumine, and to the left a fluted column and sky. In NPG 3214 the view of Whitton was painted over this column (which is now just visible). Piper supposed that NPG 3214 may be the small copy of the Florence portrait ‘by Baker’ mentioned by Vertue, [5] but the prominent pentimento may speak against this.