2 of 11 portraits of Charles Lamb 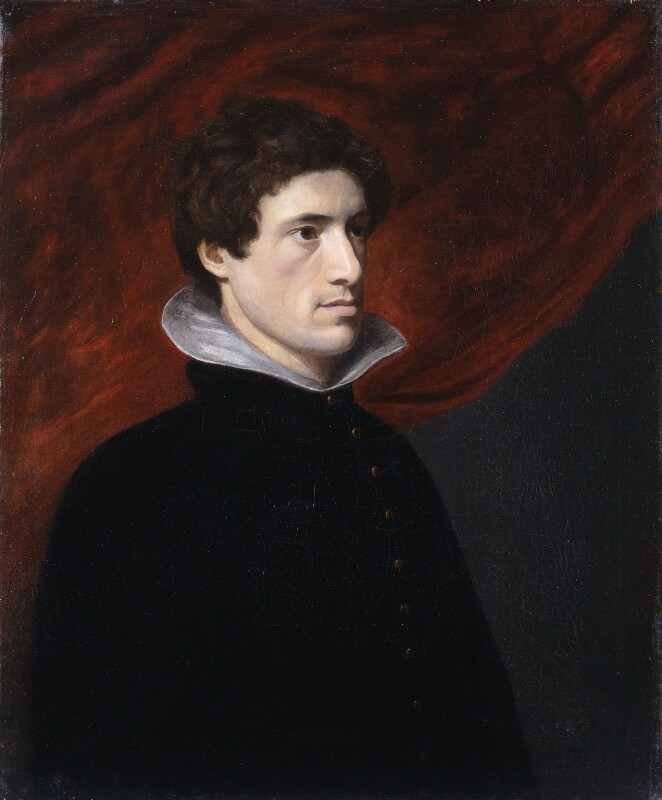 The portrait is first mentioned in a letter from Mary Lamb to Sara Coleridge, 13 October 1804: 'I have lately been talking of you with Mrs Hazlitt. William Hazlitt is painting my brother's picture, which has brought us acquainted with the whole family' (E. V. Lucas, Letters of Charles and Mary Lamb, I, 1935, p 248). It was painted while Hazlitt was staying with his brother and trying to find a publisher for his Essay on the Principles of Human Action; it was one of his last efforts in portraiture, and represents Lamb dressed as Velazquez's 'Philip IV'.
Robert Moger, the vendor, assumed it to represent Lamb in some private theatrical role which his friends believed suited his dark complexion, as a Spaniard or Venetian senator. Crabb Robinson described it as 'certainly the only painting by Hazlitt that I ever saw with pleasure' (Diary, 14 January 1812 note) but De Quincey thought it 'far from being a good likeness ... more nearly resembling John Hamilton Reynolds' (E. V. Lucas, Life of Lamb, 1905, II, p 291). It belonged to Coleridge and after his death remained in Gillman's house in Highgate where Moger remembered it hanging over the fireplace in his consulting room where Gillman spoke of it as 'the Picture of the man I love painted by the man I hate'. It seems to have been lent at some period to one of Lamb's friends in the India Office, Edward White, for when Leigh Hunt was looking for a portrait of Lamb for an illustration in his Lord Byron and Some of his Contemporaries, Lamb suggested either Meyer's or Hazlitt's, 'which last (done fifteen or twenty years since) White of the Accountant's office, India House, has; ... take your choice. I should be proud to hang up as an alehouse sign even ... H's is in a queer dress. M's would be preferable ad populum' (Lamb to Hunt, undated but about 11 December 1827, E. V. Lucas, Letters of Charles and Mary Lamb, 1935, III, pp 144-5).
After Gillman's death in 1839 his partner Robert Moger acquired it from his widow and some forty years later sold it to the NPG in 1878. During that time he lent it to Edward Moxon, Lamb's publisher, who wished to have a copy made; a correspondence between Moger, Mrs Moxon, Frederick Locker and Scharf relates to this copy which appeared in a miscellaneous book sale at Hodgson's 15 November 1880 (1734), possibly of Moxon's effects, his firm having been wound up in 1878 (Scharf's sketches of both in Trustees’ Sketchbooks, XXVI, 24 & 33). Owing to a misunderstanding about this copy, NPG 507 was deposited for a time at the Corporation of London Art Gallery, Guildhall, in 1903.

S. T. Coleridge; James Gillman; Robert Moger FRCS and sold by him to the NPG in 1878.