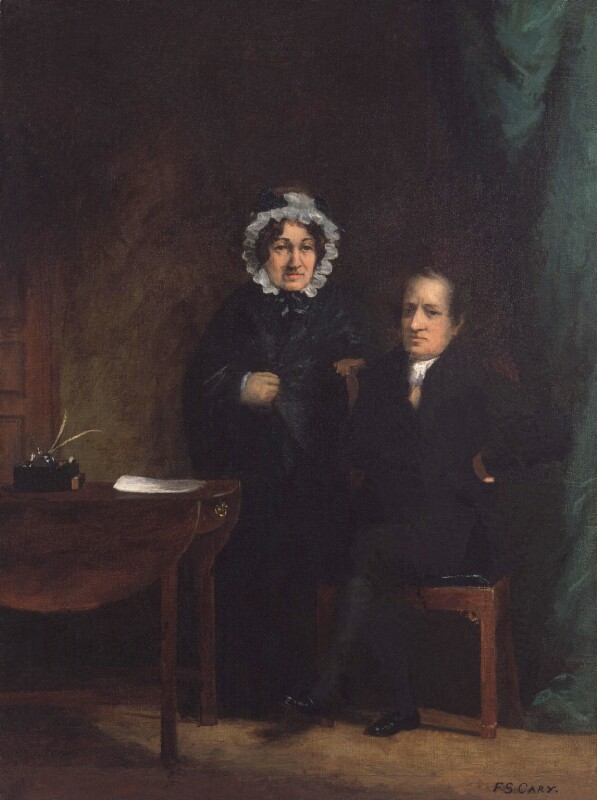 A MS letter from the artist to his pupil, Robert Bateman, dated 7 December 1878, is in the NPG archive and describes the origin of the picture: 'Dear Bateman/I commenced the portraits of Charles and Mary Lamb, which were painted entirely from life, at my studio in Hart Street, Bloomsbury, in the summer of 1834. There had been for some time an engagement that they should dine with us at my father's residence in the British Museum on the third Wednesday of each month. My father wishing me to paint their portraits, it was arranged that one or other of them should give me a sitting every Thursday, before their return home to Edmonton, where they then resided, and this continued up to the time of his death in December 1834 …' (printed
in full in Scribner's Magazine, 1019, March 1881, p 697 and shortened in E. V. Lucas, Letters of Charles and Mary Lamb, 1935, II, p 292). Crabb Robinson's Diary for 16 March 1858 says, 'At the request of Scharf I looked at a painting of dear Charles Lamb. In no one respect a likeness - thoroughly bad - complexion, figure, expression unlike. But for Elia on a paper, I should not have thought it possible that it could be meant for Charles Lamb.' This is presumably the copy mentioned by Cary later on in his letter as there is no mention of the presence of Mary Lamb, and moreover the paper on the double portrait table does not contain the word Elia; it was conceivably the version at Sotheby's 16-25 March 1858 (1392).
A letter from Canon Ainger to the NPG discusses this copy; Ainger did not think much of Cary's skill as an artist and wonders whether it was he of whom Lamb recommended his father to make him an 'apothe-cary' (letter 4 March 1896 in NPG archive).
A letter in The Times from George H. Monk, 30 March 1925, accompanied in the NPG archive by a covering note to the Gallery bearing 12 Elian Society signatures, urged a change of label under the picture with less emphasis on Mary Lamb's insanity. The Trustees declined to alter the wording on the grounds of its having been modified earlier.

Whole-length seated with his sister Mary.