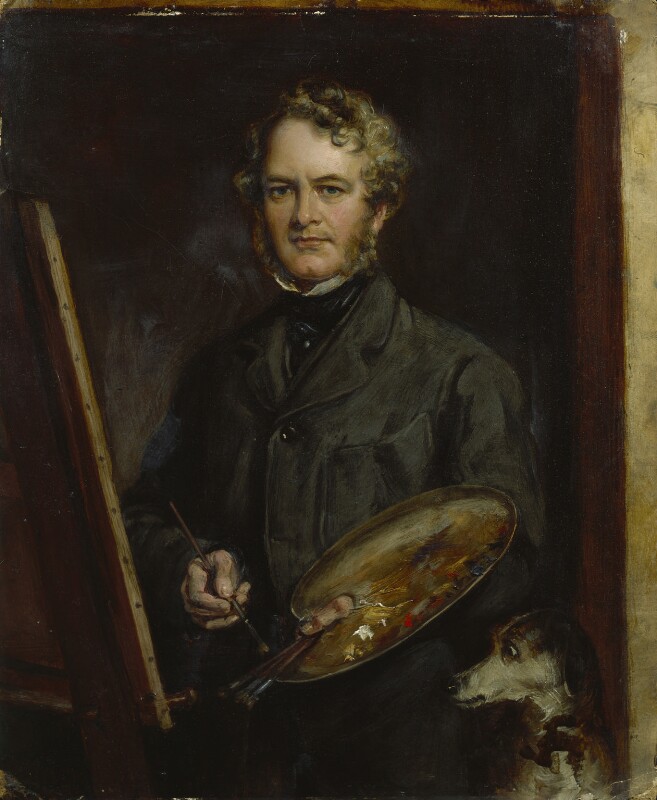 Inscribed on the back in the artist's hand: The first design for the/original picture in the possession/of W. Wells Esq of Redleaf - /Sir E. Landseer gave one/sitting for this sketch/F. Grant
Inscribed below in the donor's hand: This picture was given to me/by Sir Francis Grant on/July 12 - 1874/R. Quain

Quain was the friend and medical adviser of both artist and sitter. In a letter of 15 October 1896 (NPG archives), Quain wrote:

'Sir Edwin Landseer consented at the request of his friend Mr Wells of Redleaf to give Sir Francis Grant a sitting for his portrait. The result was the well known picture of Sir Edwin. Sir Francis made a sketch (about 14 x 8) at the sitting which Sir Edwin gave him - This sketch so pleased Sir Edwin that he painted in it the head & neck of a deer hound. Sir Francis finished the sketch as a painting and gave it to me. The history is written by Sir Francis on the back of the painting.'
The original portrait belonging to Mr Wells is now in the NPG (see NPG 834, where Grant's portraits of Landseer are discussed in more detail). The heads in both portraits are almost identical, and so is the motif of the dog in the bottom right-hand corner, but they are quite different in pose and accessories. The artist's son, Colonel F. Grant, who owned a study for the Wells portrait, exhibited VE, 1892 (39) (probably the oil sketch now in the Russell-Cotes Art Gallery, Bournemouth), which was very close to the finished design, wrote (letter of 26 May 1896, NPG archives): 'It is perfectly evident that my father's memory played him false for the moment. No portrait painter would speak of the sketch (given to the NPG by Quain) as the sketch for the Redleaf portrait except by an oversight.' Quain could see no reason why his sketch was not the first idea for the Wells portrait, which it probably was, and wrote (letter of 12 May 1896, NPG archives): 'we must regard Sir Francis as knowing something of his own work even more than the Colonel and of telling the truth'. The NPG drawing (436) is closely related to NPG 1018 and was probably done at the same time.

The artist; given to Sir Richard Quain, Bart, and presented by him, 1895.