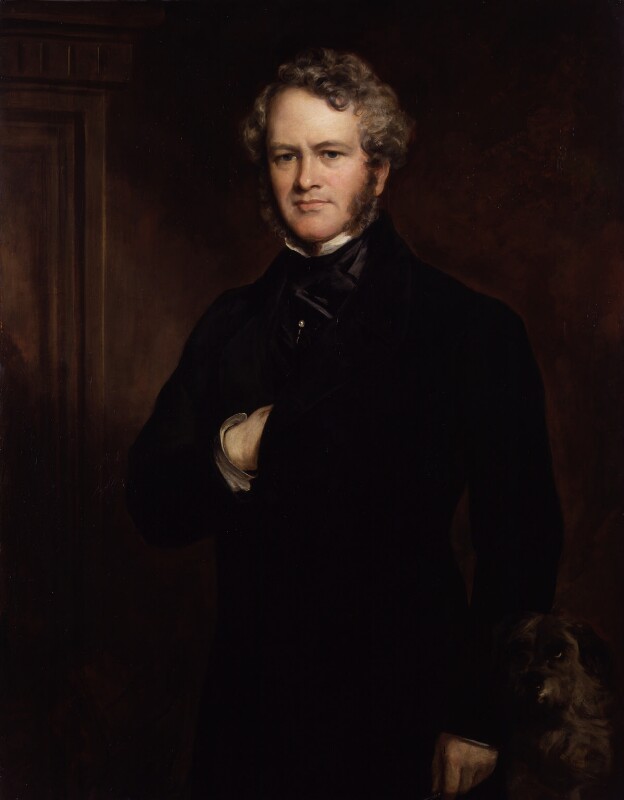 Inscribed on a damaged label on the back of the picture: Grant[?] R.A./Sir Edwin Landseer

Wells had a large collection of Landseer's work, and was a close friend, hence his reason for commissioning this portrait. A preliminary oil sketch, establishing the final composition, is in the Russell-Cotes Art Gallery, Bournemouth: this is probably the sketch once owned by the artist's son, Colonel F. Grant, about which there is correspondence in the NPG archives (it is discussed with NPG 1018). Another small oil portrait of Landseer by Grant in the NPG (1018), for which there is a pencil study dated 1852 (NPG 436), was described by Grant on the back as a study for the Wells portrait. The heads in both are identical (even the curls in the hair are the same), and so is the motif of the dog in the bottom right-hand corner, but pose and accessories are quite different. NPG 1018 is presumably Grant's first idea for the Wells portrait, which he subsequently abandoned, because he or his patron found it unsatisfactory. On the other hand, Grant may only have treated NPG 1018 as a spontaneous study from the life, to obtain a likeness, and worked out the pose independently later on. If this is so, it would throw interesting light on Grant's methods, and suggest that he did not always paint his portraits in comprehensive sittings, but treated head and pose as separate problems. NPG 1018 shows Landseer painting, and is a more appropriate image than the finished portrait, which might be that of a businessman; it is impossible to know why Grant finally adopted such a formal and conventional pose. A life-size unfinished oil portrait of Landseer by Grant, clearly dating from this period, is in the Royal Academy, reproduced Country Life, CXXXI (1962), 1373. Although the head differs slightly from those in the portraits already discussed, it is probably another experimental version for the Wells portrait. It shows Landseer in a landscape setting, in hunting clothes, and with a telescope, its case strapped across his back. Another drawing of Landseer, by Grant, is reproduced Mrs E. M. Ward, Memories of Ninety Years (n.d.), facing p 4.

Commissioned by William Wells of Redleaf; Wells Sale, Christie's, 10 May 1890 (lot 26); bought Henri, Marquis de Rochefort-Lucay, and presented by him, 1890.