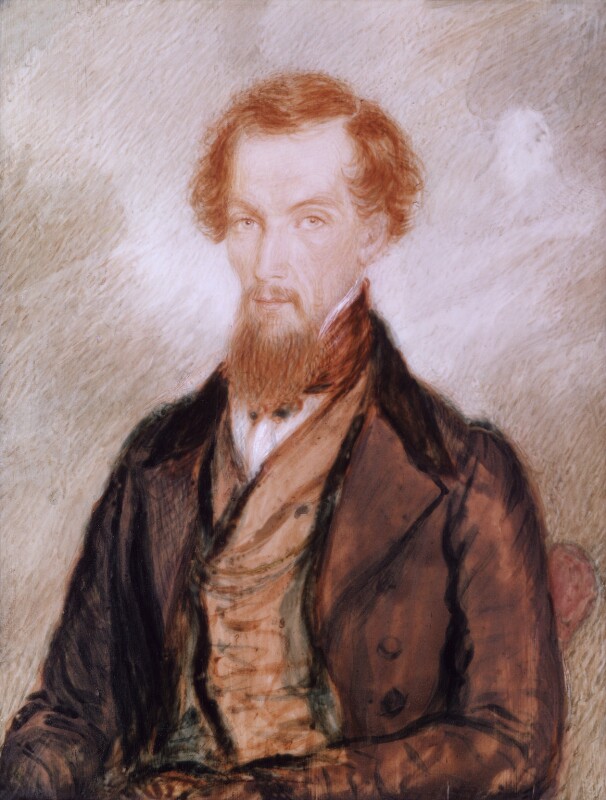 This miniature, which appears to be unfinished, is a secondary version of the miniature in the India Office Library, London, exhibited Great Irishmen, Ulster Museum, Belfast, 1965 (114a). The latter was formerly in the collection of Sir Herbert Edwardes, engraved by S. Freeman, published R. Bentley, 1851 (example in NPG), for Sir H. B. Edwardes, A Year on the Punjab Frontier (1851), I, frontispiece. Lawrence gave Edwardes the India Office Library miniature as a keepsake when they were together in Lahore in 1847, or shortly before Lawrence left for home leave in 1848. [1] Lawrence received his KCB while in England in 1848, and Freeman must have added the star (not drawn in the original) to his engraving of the miniature for Edwardes' book, in order to bring the portrait up to date. According to the engraving, the original was the work of a native artist. A. Constable has suggested that the miniatures may have been the work of Gholam Khan, a Delhi miniaturist, who is said to have painted Lawrence in 1853 (the date may be a mistake), and to have produced several replicas. [2] The NPG miniature is similar in size to that in the India Office Library, and identical in pose and feature (except for the absence of a watch-chain), but it is much lighter in colouring, and much less highly finished. Lawrence was agent for foreign affairs and the Punjab under the 1st Viscount Hardinge's administration. The donor was chairman of the NPG trustees for several years.

1) Information kindly communicated by Mrs M. Archer of the India Office Library, letter of 27 June 1967 (NPG archives).
2) Letter of 23 July 1887 (NPG archives); Constable had met Gholam Khan's grandson, Ismail Khan, himself a miniaturist, from whom he obtained his information about the miniatures of Lawrence.

Reddish hair and beard (possibly the result of fading, or the unfinished state of the miniature). Dressed in a dark stock, white shirt, light brown waistcoat and dark brown coat. Seated in a chair of which only a fraction of the top-strut is visible. Background colour pale greenish-brown.