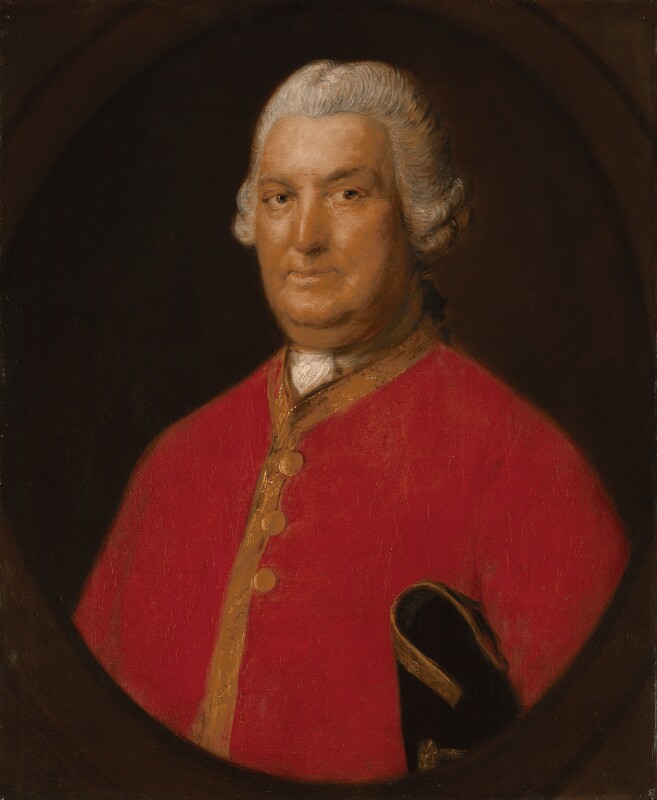 Stylistically NPG 777 is of the late Bath period, [1] perhaps as late as 1774 when Gainsborough left for London or 1775, the year Lawrence died. The head is flecked with touches of white which gives it a crayon-like quality. The handling is very close to the portrait of Daniel Minet in the Society of Antiquaries, [2] exhibited by the artist at the Royal Academy, 1778. The sitter was in England from October 1750 to 1752 and returned finally from India, due to ill health, at the end of 1759. No other versions of the portrait are recorded. It may owe something to the frontal type, engraved by Houston by 1761 (F. O'Donoghue and Sir Henry M. Hake, Catalogue of Engraved British Portraits ... in the British Museum, 1908-25, 1), one of two portraits by Reynolds showing the sitter in general officer's coat. In NPG 777 the coat is not uniform which may reflect the sitter's views on his lack of military preferment. Holding only the rank of lieutenant-colonel, he was superseded, 1754, by Colonel Adlercron, sent out from home, but refused to serve under him. His final appointment on 9 February 1759 was that of 'major-general in the East Indies only'. [3]

Rather flattened; described, 4 August 1887, 'the face admirable - the background seems rather in a decayed condition'; [1] pin holes at the corners; lined and repaired, 1887.

1) Letter from the donor, NPG archives.

Presented, 1888, by Colonel (afterwards Sir Henry) Yule, a member of the council of India; probably by descent from the sitter's friend Robert Palk, governor of Madras 1763-67 and 1st Baronet Haldon, 1782. Lawrence was godfather to Palk's son and the Palk family erected the tomb to him in the church at Dunchideock as also the column on Haldon Hill, near Exeter; sold anonymously, Christie's 29 July 1887, lot 172, when sketched by Scharf, but actually the property of Lord Haldon, i.e. Lawrence Palk, 5th Baronet and 2nd Baron Haldon (1846-1903), great-grandson of governor Palk.