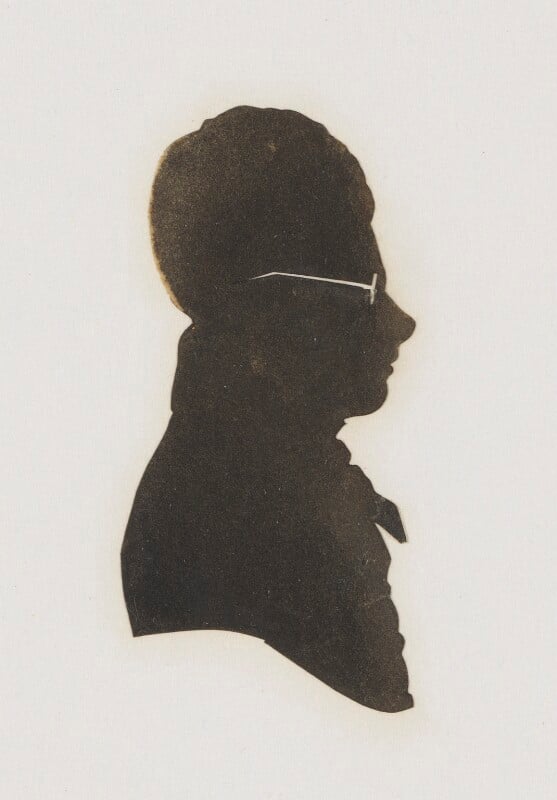 The silhouette of the young Edward Lear was first published in 1911. Constance, Lady Strachey had edited a first volume of letters of Lear in 1907, some twenty years after the artist’s almost unnoticed death.[1] The success of the book led her to edit a second volume, Later Letters of Edward Lear (1911), which contained illustrations of portraits and material that had come to light as a result of the earlier volume. Among the new illustrations were four Lear family portraits, silhouettes of Edward (NPG 1759) and Catherine (NPG 1759c), his youngest sister, and miniatures of two older ones, Mary (NPG 1759b) and Ann (NPG 1759a). In 1911 the portraits belonged to Mrs Allen, a distant relation by marriage to Mary Lear.[2]

Strachey had known Lear and thought the silhouette an accurate likeness:

The silhouette of Lear himself is extraordinarily good, accentuating with his hair the fine high forehead and very cone-shaped top to his head, which in later years, though quite devoid of hair, still gave the striking egg-like appearance. In this early portrait, which is so characteristic, one sees the coming man, the promised aggressiveness to be fulfilled into the positive, when in later life he did not fancy people or they happened to be Germans![3]

A few years later, in 1915, when the Revd Allen offered the same four portraits to the National Portrait Gallery, Mrs Allen (whose full name never appears in the offer correspondence) had died. All four portraits were accepted, that of Ann as being the sister who brought up Edward, and those of Catherine and Mary as tokens of the great brood of Lear siblings.

In her appreciation, perhaps tactfully, Lady Strachey omitted any reference to Lear’s more familiar features, the lenses perched on a large, wedge-shaped nose and, later on, the thick bushy beard. Lear was sensitive about his looks, and pre-empted any mockery in countless self-caricatures (see NPG 4351). He exploited and exaggerated his own features in the limericks, as in the illustrations for A Book of Nonsense (1861: ‘There was an Old Man, on whose nose / Most birds of the air could repose’, or ‘There was an Old Man with a beard, who said “it is just as I feared! / Two Owls and a Hen, four Larks and a Wren, / Have all built their nests in my beard!”’), of the Dong with the Luminous Nose in Laughable Lyrics (1877), and many others. The nonsense verse illustrations are not self-caricatures but they do play on physical features he observed in himself and others.

The silhouettes of Edward and Catherine Lear are by an unknown hand, presumably the same artist. Edward’s spectacles are rendered by fine cuts in the paper; Catherine’s profile is enhanced with touches of gold-bronze paint. They are undated but belong to the 1830s (as indicated by costume and hairstyle), and were possibly given to Mary Lear as mementos when she emigrated to New Zealand in the 1850s. In 1915 they were given a new joint frame and remounted in vis-à-vis style by the NPG’s framer, Francis Draper.[4]