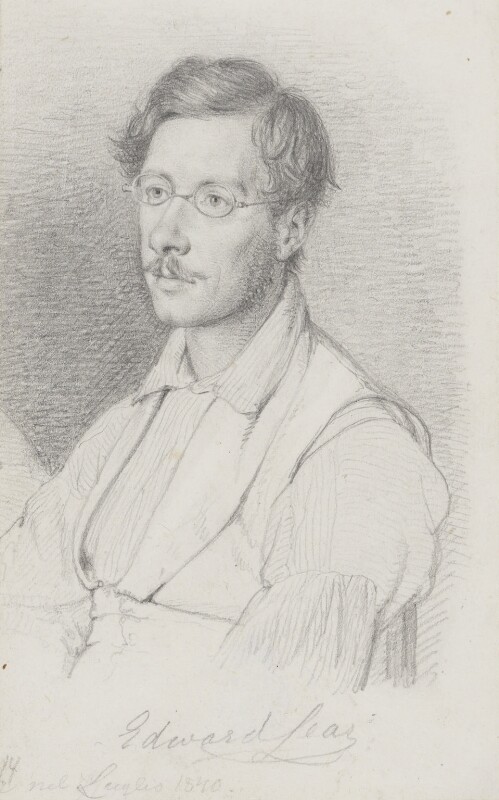 In about 1836 Edward Lear decided his profession was to be a landscape painter. His patron Edward Smith Stanley, later 13th Earl of Derby, encouraged him and helped fund a long stay abroad. Lear left England in the summer of 1837 and was in Rome by the winter. For the next ten years the city was his base for extensive travels over Italy.

The first years were the happiest and most stimulating of his life; the climate suited his health and he was surrounded by communities of artists of all nationalities. One friendship was with the Danish student Wilhelm Marstrand. They travelled in Umbria and in the summer of 1839 spent a ‘long Civitella sojourn’ together. Lear described him to his sister Ann as ‘thoroughly good and amiable’.[1] Later Lear came to regard that period as a prelapsarian time of undashed aspirations.

In spring 1860 he reminisced in his diary about the days ‘when W. Marstrand & I used to be always together!’[2] And hearing of Marstrand’s death in Copenhagen, in 1873, as he himself was fretfully preparing to board ship for Bombay, Lear wrote in his diary: ‘So: I can never see dear gentle good clean Marstrand more!…He was the F.L. of those days: and I cannot dare to think of them.’[3] Certainly Marstrand’s portrait of Lear expresses a sense of youthful, clear-faced idealism which is without parallel in the iconography.

Wilhelm Nicolai Marstrand (b. Copenhagen), slightly older than Lear, had been in Italy since 1836, and in 1840, the date of the drawing, he was on his way back to Scandinavia; the portrait may have been made to mark the friends’ parting. An artist of the nineteenth-century Danish ‘golden age’, he absorbed the southern light and developed a range of Italian genre subject matter; in 1853 he was appointed director of the Royal Danish Academy of Fine Arts.

The drawing remained in Denmark until it was offered for sale to the National Portrait Gallery in March 1939 by Mr Aage Marcus of Hørsholm, Denmark,[4] who wrote: ‘In my possession is a portrait-drawing representing the author and painter Edward Lear, autographed by him, and executed in Rome July 1840 by Wilhelm Marstrand, Professor at the Royal Academy of Fine Arts in Copenhagen. Marstrand who lived from 1810–1873 is regarded as one of the most prominent Danish portrait-painters; he was a friend of Lear with whom he corresponded during several years. […] I should be glad to know whether the National Portrait Gallery would care to acquire the drawing which – with the scarcity of portraits of Lear in view – should cost 20 gns.’[5] The offer was accepted without hesitation. A hitherto unfamiliar view of Lear, and a work by an artist little represented in England, now entered the public domain.

The drawing seems to have been cut down on the left side. The inscription ‘Edward Lear’ appears to be autograph.

The artist; ‘civil-engineer Rümp’; Aage Marcus, by whom sold to the Gallery, June 1939.