3 of 5 portraits of Edward Lear 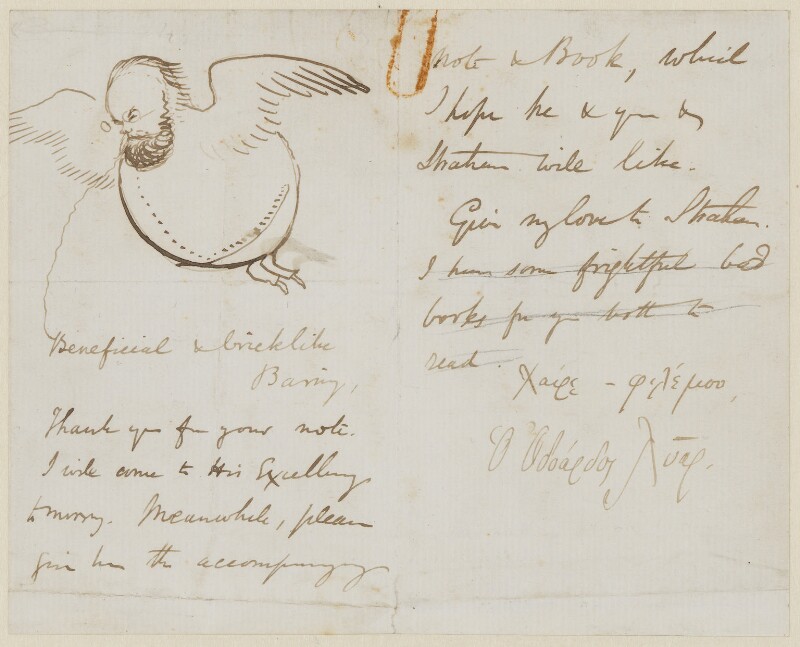 Edward Lear’s biographer Vivien Noakes suggests that it was not until July 1860 that he first began the ‘perfectly spherical’ signature self-caricatures, of which NPG 4351 is a good example.[1] He typically added rows of buttons to the ball to suggest dress, sticks for legs, arms swept back or akimbo, a head with a jutting beard and large round glasses. By the 1860s the typical Lear self-portrait was cast.

The publication of The Book of Nonsense in 1846 had made his name as an exponent of the absurd, and as an extension of this he went on to develop a signature persona in his letters and other writings. Lear was a continuous traveller and a compulsive correspondent. Countless self-caricatures, formalized by the 1860s into bobbing, tumbling, floating spherical figures, decorated his correspondence and other writings. They were self-deprecating and humorous, but also insistent reminders of self during his long absences from England. NPG 4351 is an example of this urge to lighten – and imprint his stamp upon – the merest note to a neighbour.

One of the earliest self-caricatures, years before the spherical type, is in a letter dated October 1831 and shows a gangly figure with a parrot perched on his top hat, large glasses and a prominent nose.[2] A drawing showing Lear as a long-suffering mature student at the Royal Academy Schools, mocked by the other students (‘little boys’), animates a letter to Chichester Fortescue in January 1850.[3] An interesting, in fact unique uncaricatured self-portrait is reproduced as a vignette on the title-page of More Nonsense (1872). Here Lear’s photographically accurate head is placed on a sketched body, facing a fellow traveller with a foolish Nonsense-figure head. It illustrates a ‘doubting Thomas’ episode that took place on a train journey in 1866 and at the same time – quite casually – raises issues of self-awareness and public identity. The incident is also a reminder that Lear never had a public image.

A few days ago in a railway as I went to my sister’s a gentleman explained to two ladies, (whose children had my ‘Book of Nonsense’) that thousands of families were grateful to the author (which in silence I agreed to) who was not generally known – but was really Lord Derby. […] Says I, joining spontanious in the conversation – ‘That is quite a mistake: I have reason to know that Edward Lear the painter and author wrote and illustrated the whole book.’ ‘And I,’ says the Gentleman, says he – ‘have good reason to know Sir, that you are wholly mistaken. There is no such person as Edward Lear.’ ‘But,’ says I, there is – and I am the man – and I wrote the book!’ Whereon all the party burst out laughing and evidently thought me mad or telling fibs. So I took off my hat and showed it all around, with Edward Lear and the address in large letters – and also one of my cards, and a marked handkerchief: on which amazement devoured those benighted individuals and I left them to gnash their teeth in trouble and tumult.[4]

Lear’s verse illustrations influenced future generations of strip cartoonists, and some of the self-caricatures are also episodic and sequential. An early example is his set of drawings of a journey to Scotland with Geoffrey Phipps Hornby in September 1841;[5] another is of a trip to Italy in 1842 with Charles Knight, depicting a series of twenty-one mishaps with a horse.[6] For later examples see the sequence of drawings of Lear in ‘Ye Artist in ye wonderfull bedde’, c.1854 (Fitzwilliam M., Cambridge, 1087 (1–7)); as a bird in the album ‘Walk on a windy day’, drawn in 1860;[7] and the ‘Misadventure at the San Remo Post Office, 7 june 1871’, exhibited at San Remo in 1997.[8]

The greatest concentration of the self-caricatures can be found among the Edward Lear correspondence, papers and drawings at the Houghton Library, Harvard University. Collections with Lear deposits have come up at auction; there was an important number among the Tennyson Papers at Sotheby’s, 21–22 July 1980. A range of self-caricatures decorating his letters is reproduced in Strachey 1911a.

NPG 4351 was one of twelve illustrated letters which Lear addressed to his ‘intimate friend’ and neighbour in Corfu, Evelyn Baring during the winter of 1863–4. Baring was aide-de camp to the Governor, Henry Knight Storks – the ‘Excellency’ of the letter – and the letters were included in a posthumous publication, Constance Strachey’s edition of Queery Leary Nonsense, in 1911. See also Strachey 1911a, pp.58 passim for further Lear/Baring correspondence. Baring’s great-grandson, Captain John Hills, auctioned the letters at Sotheby’s, 26 February 1964; this drawing, lot 3, was purchased by Agnew’s for £70 and shortly afterwards sold to the NPG for £77.[9]