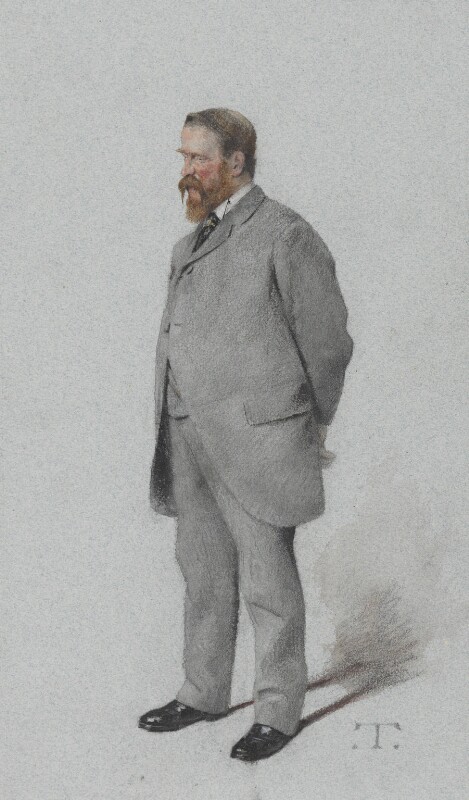 From Vanity Fair’s launch in 1869 and during its early years, the editor, Thomas Gibson Bowles, favoured continental artists for the full-page portrait feature. [1] James Tissot was a regular favourite; when he returned to Paris in 1877 his place was taken by another French painter, Théobald Chartran. Bowles gave him plum figures to draw, including the President of France, Jules Grévy; Umberto I, King of Italy; Emile Zola; Giuseppe Verdi; Giuseppe Garibaldi; and Pope Leo XIII. But the success of Vanity Fair depended on ‘irreverent satire’, and this was not Chartran’s style, as can be seen in his subtle characterisation of Sir Edmund Lechmere in NPG 4628. Bowles could not afford to publish too many such well-mannered drawings, and in 1884 Chartran too returned to Paris. [2]

The print after the drawing appeared in Vanity Fair on 23 June 1883, captioned ‘St. John of Jerusalem’. [3] In the spring of 1883 Lechmere, secretary general of the Order of St John, played a crucial role in purchasing a site for an eye hospital in Jerusalem. This had been in the news, and the print’s enigmatic caption was actually a clear reference to Lechmere and his philanthropy.

This drawing was part of a lot of 14 drawings and three prints, all Vanity Fair material, bought by P. & D. Colnaghi & Co. Ltd. from Sotheby’s on 3 October 1968 (24). A few days later the National Portrait Gallery purchased ten of the drawings (NPG 4627–4636) from Colnaghi for £140. A number were and remain, like NPG 4628, attached to a mount of brown Ingres paper decorated with inked lines and labels identifying the subject and date of publication.

In keeping with his reputation for modesty, Lechmere has a small iconography in which this drawing occupies a significant place.