4 of 31 portraits matching these criteria: 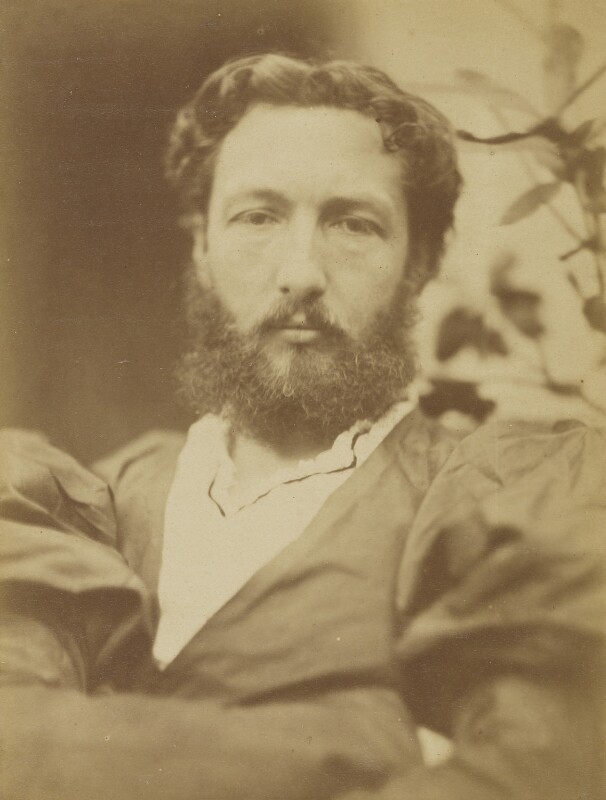 This image was created during the 1860s and included by David Wilkie Wynfield in his series of artists portrayed in historical and contemporary costume, many of which were released for sale from March 1864 under the title The Studio: A Collection of Photographic Portraits of Living Artists, taken in the style of the Old Masters, by an Amateur.

Wynfield’s soft-focus head studies were of members of the St John’s Wood Clique, who met weekly for sketching and mutual criticism, and their friends. At this point Leighton lived and worked at 2 Orme Square, off Bayswater Road, his home since returning from Italy in 1859. Although not actually a member of the Clique, who lived locally to St John’s Wood, he would certainly have been closely associated with its leading figures.

The photograph cleverly illustrates the interests and character of the sitter. Leighton’s costume suggests a sixteenth-century Venetian, seemingly appropriate for a painter of the renaissance and classical subject picture, and he was at this time preoccupied with the dreamy, decorative side of Venetian art. Golden Hours (1864), for example, shows a distinctly Venetian bias. The costume worn by the male model in this painting is almost identical to Leighton’s clothing in the photograph, a dark over-garment with large puffed shoulders and a white shirt with a collar edged with a strip of dark ribbon. Juliet Hacking suggests that in this case, as with other images in the series, the costume was more likely to have been suggested, and indeed owned, by the sitter rather than the photographer.[1] In an alternative three-quarter profile of Leighton by Wynfield (see ‘All known portraits, Photographs, 1860s’), the artist wears an elaborate white costume similar to that worn by Cimabue in Leighton’s monumental canvas Cimabue’s Celebrated Madonna is Carried in Procession in the Streets of Florence (1854–5).[2] Hacking explains that ‘for this generation, an aesthetic appreciation of the Old Master style was conflated with an appreciation of the Old Masters themselves as ideal types of manly beauty’.[3]

An additional print of this image is in the collection of the Victoria and Albert Museum, London (133-1945).

For an alternative image of Leighton by Wynfield, see ‘All known portraits, Photographs, 1860s’.

Quarter-length, full-face, with arms folded to the front, full beard and hair with short curls, wearing renaissance-style dress, including a white shirt with ruffled collar and dark over-garment with oversized sleeves.