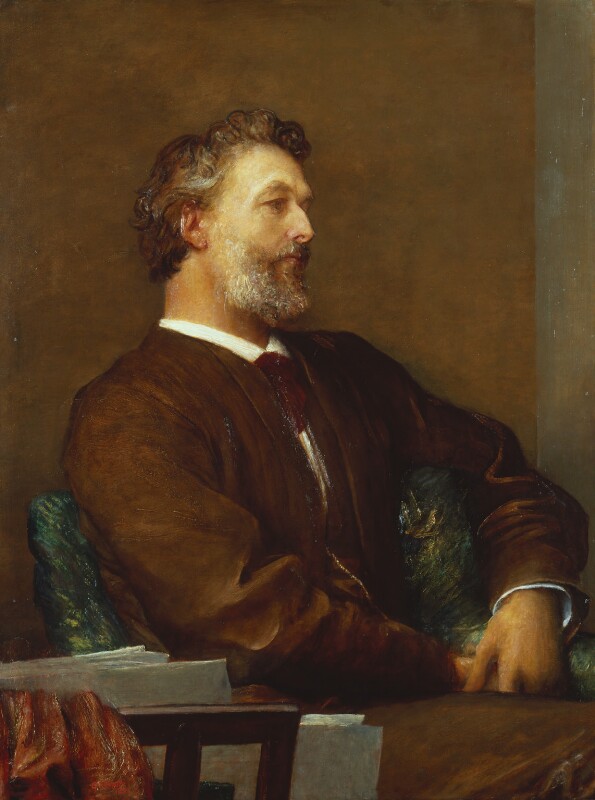 This is one of three images of Leighton painted by George Frederic Watts in the course of their long and devoted friendship, which began after a first meeting in the summer of 1855 and lasted until Leighton’s death in 1896. Around that time Watts confided to Emilie Barrington, describing the strong affection he felt towards his friend: ‘As for myself, personally, I can say that I admired and loved him as much as one man can another.’[1] The artist’s extensive surviving correspondence with Leighton fills a volume of his ‘Letter Books’ at the Watts Gallery, Compton, Surrey and is of considerable biographical importance.

The first portrait was executed around 1871 and shows Leighton in early middle age, sitting informally with his head resting in his hand, staring pensively out towards the viewer (see ‘All known portraits, By other artists, 1871’). Seven years later, on the occasion of Leighton’s election as President of the Royal Academy, Watts began a second portrait of his friend. Although Watts had been elected an Academician shortly before Leighton (in 1867), he continuously questioned the wisdom of remaining one and somewhat neglected to perform his duties in the role. In November 1878, by way of an apology to the institution, he offered to produce a portrait of its new president.[2] The resulting work shows Leighton in academic robes, wearing his chain of office as PRA, with his elbow resting upon the base of his statue, An Athlete Wrestling with a Python (see ‘All known portraits, By other artists, 1888’). It was exhibited at the RA in 1881 (484) but was then reclaimed by the artist, who altered the head after some fresh sittings. It was not returned to the Academy until around 1888.

This has caused some confusion, and it was initially assumed that NPG 1049 was the work in the 1881 exhibition. Yet contemporary reviews of that show clearly describe Leighton as being dressed in the gown of a Doctor of Civil Law.[3] Furthermore, an article of 1888 in the Magazine of Art concerning the RA portrait states that it had been exhibited in 1881 but only recently completed, and was a gift from Watts to the institution.[4] In this sense the dating 1888 for the RA portrait is correct. So similar is the NPG portrait in pose and attitude, however, that the two were almost certainly derived from the same sittings, conducted before the exhibition in 1881. Leighton and Watts were close neighbours in Kensington from 1866, and it is likely that these sittings occurred in the older artist’s studio at Little Holland House. The works show the sitter in an identical position, with his left elbow hooked over the back of the chair and hands loosely clasped upon his lap. Only the costume and the accessories differ. The RA portrait must also have shown the face of the much younger Leighton before it was reworked.

As was the case with his portraits of other famous men, it appears that Watts used the opportunity of a commission to execute an additional version for his own collection. He evidently preferred a less formal image for this, choosing to depict his friend without the vestiges of rank and office. Without them, this composition still carries a sense of monumentality: it is larger than his other portrait studies of this kind, which tend to show the head and shoulders only, and makes use of unusually rough and heavy impasto. The hair and beard are executed with broad brushstrokes and the cheek, nose and brow are built up solidly upon the canvas. A wooden print stand is shown in the foreground, containing white sheets and partly covered with a reddish-brown cloth (there is evidence of underpainting where the cloth originally extended further upwards). The background colour is brown, apart from a strip of grey running along the right-hand margin, which may describe a pillar.

In 1895 Watts presented to the NPG a series of his portraits, now known as the Hall of Fame, and he also donated individual portraits when sitters died. The Leighton portrait was delivered to the gallery in July 1896, in the same Watts-style gilt frame in which it remains today.[5] A very closely related drawing, showing the figure half-length, with exactly the same pose and costume, was reproduced as an etching by Paul Adolphe Rajon (signed and dated ‘G.F. Watts / 1880’ in the plate).[6] It was subsequently published by the British and Foreign Artist’s Association and also in the biographical series Modern Artists.[7] If this work was originally employed by Watts as a preparatory sketch, it can be assumed that the sittings for NPG 1049 began in 1880. A strongly related pastel drawing (head and shoulders only) is reproduced in Emilie Barrington’s Life and Letters of Frederic Leighton as a photograph by Frederick Hollyer and attributed to Watts.[8]

Half-length, nearly profile to left, seated to left, hands loosely clasped and resting upon lap, left elbow hooked over back of chair, brown eyes and hair, with traces of grey at the temples and in the beard, wearing a white shirt, dark red necktie, brown waistcoat with watch chain, and brown coat and trousers, against brown background.