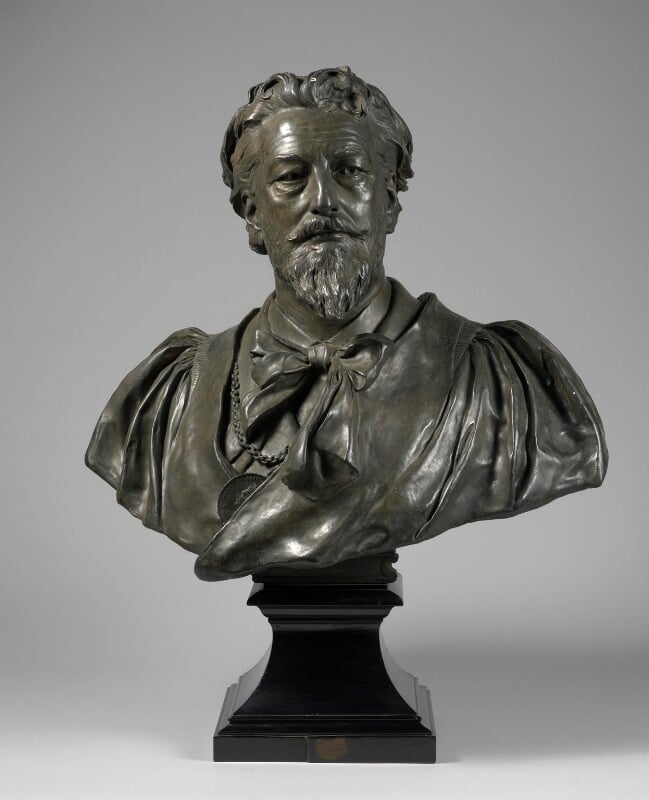 This plaster bust, painted to resemble bronze, was presented to the National Portrait Gallery in 1922 by Frederick Brock, son of Thomas Brock,[1] along with a bust of Joseph Lister (NPG 1958). In a letter to the Gallery, Brock stressed that it was his father’s intention that these works should belong to the nation. He therefore agreed with the suggestion that they should be described as ‘Presented October 1922, in accordance with the sculptor’s wish’.[2] A year later, in 1923, the NPG commissioned a bronze cast to be made from the plaster bust, at the Cast Department of the Victoria and Albert Museum (NPG 1957a).

An original bronze edition of the bust was submitted as Thomas Brock’s diploma work on the occasion of his election as a full member of the Royal Academy in 1891, and exhibited at the RA's summer exhibition of 1893 (1717).[3] The choice of subject was a token of esteem and respect towards the older artist, who was then president of the institution. Leighton was indeed a long-term friend and mentor to Brock, and it was to the younger sculptor that he had turned for major assistance with the rendering of his own Athlete Struggling with a Python, full-scale and in bronze, in the period up to its exhibition in 1877. After completing the initial modello for the sculpture, Leighton began work on the life-size version in Brock’s studio at 10 Boscobel Place, Westminster in 1874–5. In 1882, Leighton described the extent of Brock’s participation: ‘I had made a highly-finished sketch in clay. I put it into the hands of Mr Brock, who caused it to be set up, and descended into various operations for which so skilled a sculptor is not required, but in all cases performing such offices as left the artistic individuality of the work wholly mine.’[4] This partnership continued with the production of Leighton’s second major sculptural work, The Sluggard (1885), where further use was made of Brock’s studio, now at 30 Osnaburgh Street, Regent’s Park. Indeed, records of Leighton’s account with Coutts Bank over these years provide evidence that the artist made a number of substantial payments to Brock, presumably to cover the costs of studio use and workmanship.[5]

Around 1887, Carl Jacobsen (1842–1914), the brewer who founded the Ny Carlsberg Glyptotek in Copenhagen, commissioned a marble replica of Leighton’s Athlete for his museum. Frederick William Pomeroy carved most of this sculpture in Brock’s studio, under Leighton’s supervision. Shortly after the marble Athlete had been transported to Denmark, Leighton received a letter from Jacobsen expressing his desire to display portraits of those sculptors whose work was represented in the museum. Leighton himself suggested Brock's work to Jacobsen, and in due course a marble version of this portrait was sent to Copenhagen.[6] It is unclear exactly when the younger sculptor worked on his bust, but he must have made sufficient progress for Leighton to recommend him in September 1891. The bust was not finished until April 1893, and it is likely that much of the work was undertaken during 1892.[7] Brock certainly had trouble securing sittings for the portrait throughout. In a dictated letter dated 28 January 1891, Leighton regrets that he cannot at that moment sit for the bust, but sends a photograph in his place.[8] A letter from Brock to the President and Council of the RA, dated 17 November 1891, explains that he will not be able to complete his diploma work within the stipulated time, due to Leighton being away on the Continent and unable to provide the necessary sittings.[9]

This was the second life-size bust of Leighton executed by the younger sculptor; the first was produced in 1881.[10] The busts of 1881 and 1892 differ strongly in their portrayal of Leighton. The earlier example is undraped and classical in style, whereas the later is more romantic in feeling and presents Leighton, head inclined upwards, dressed in the full regalia of the President of the Royal Academy.[11]

Of the numerous known versions of the present bust, arguably the most interesting is the reduced-size (400 x 320 x 119mm) bronze replica presented to Leighton House Museum in 1897 by Brock himself.[12] This helped to form the core of the permanent collection in the early days of the museum’s operation. Additional examples include a full-size plaster cast of the bust at Leighton House and also a reduced-size plaster version, related to the bronze edition at the museum;[13] a full-size bronze in the Athenaeum, London, presented by Brock;[14] a full-size version presented to Scarborough (Leighton’s birthplace) by the Royal Academy Leighton Fund in 1916;[15] another reduced-size bronze replica (400 x 320 x 119mm) at the Russell-Cotes Art Gallery & Museum, Bournemouth, presented by Sir Wilfred and Lady Fish in 1958;[16] a reduced version bought by the Prince of Wales (later Edward VII) and now in the Royal Collection;[17] and a further two bronze editions (one reduced-size and the other of unknown dimensions) in private collections.[18]

Head-and-shoulders, chin slightly raised, with pointed beard and moustache, wearing robes and medal of the Royal Academy, and a loosely tied cravat.

Presented to the NPG by Frederick Brock, son of Thomas Brock, in 1922. Given in accordance with the sculptor’s wish.