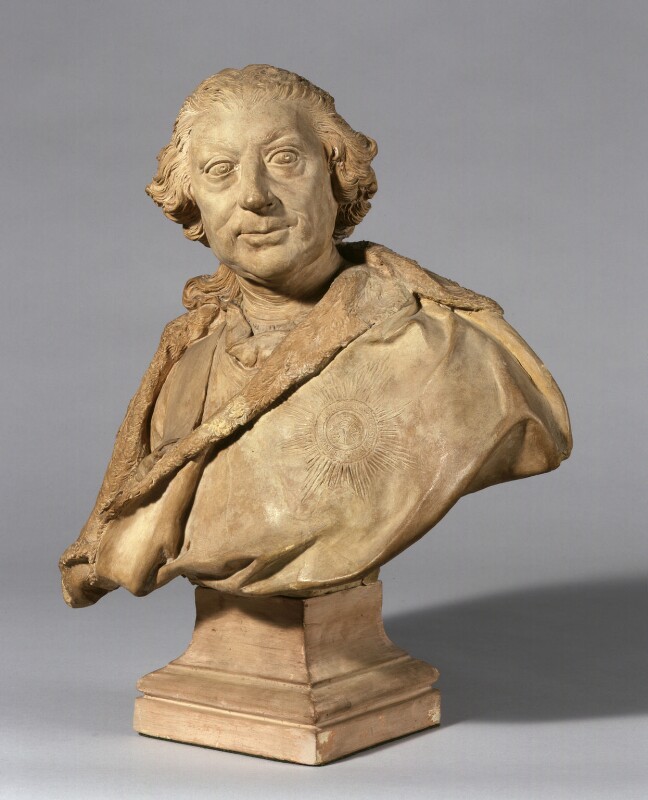 NPG 2013 corresponds with the undated marble at Windsor incised L. F. Roubiliac sc. ad Vivum and must be the model. Mrs Esdaile places it possibly circa 1748 but more probably from the last years of the sculptor's life. [1] Roubiliac died 1762. Ligonier received the Bath in 1743 but sittings would have been difficult before the end of the war, 1748. In 1926 W. T. Whitley discovered a contemporary reference to 'A Bust' of the sitter exhibited by Roubiliac at the Society of Artists 1761 (153) and an entry 3 February 1763 'To paid Mr Roubilliacs bill for £153 11s’ has been found in the regimental account kept by Ligonier's agent Richard Cox. [2] The payment, which must have been to the sculptor's estate, has been taken to refer to the Windsor marble, but unfortunately the supporting personal ledger where details might have been expected cannot be traced. [3] Mrs Esdaile believed the marble was a royal commission; this is prima facie evidence to the contrary. Furthermore, according to Benjamin Justham, inventory clerk to George IV, the Roubiliac busts of Ligonier and George II were presented, 27 June 1817, by a Thomas Lloyd of 112 Gloucester Place, London. [4]
Four plasters and a mould of the bust were in the Roubiliac sale of 1762, lots 11 and 47 of the 1st day, lot 4 of the 3rd day and lots 9 and 17 of the 4th day. [5] These have since disappeared.

Elderly appearance; eyes incised, prominent high-bridged nose, lips slightly parted, a vertical scar on his right cheek, wig with knotted tail resting on his right shoulder; fur-lined cloak over breastplate, ribbon of the Bath, the star embroidered on the cloak.

Cracks at the base of the shoulders and in front, below the star of the Bath and in the fur above the centre line of the breastplate, have been repaired; an area at the edge of the collar on his left shoulder has been painted in; the tip of his left shoulder is damaged at the back; a few small areas of white visible in some of the valleys of the wig; 19th-century(?) rose-coloured plaster socle now faded.

Bought 1924, from Basil Dighton of 3 Savile Row, W1, and believed by him to be of Lord St Vincent. Mrs Esdaile, however, states that the bust had ‘passed from a dealer in Norwich to the vendor and been called Lord Howe'. [1]