62 of 5083 portraits matching these criteria: 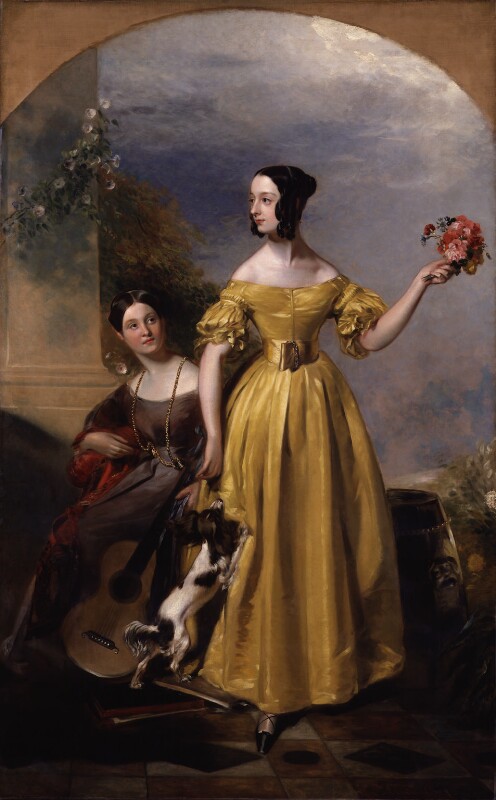 The identification of the sitters is traditional. The features of the two women agree fairly well with authentic likenesses of them, but not conclusively so. In a letter of 21 February 1951 (NPG archives), Francis Howard wrote: 'I bought it for her [Lady Wavertree] many years ago at Knight Frank and Rutleys if I remember rightly.' The portrait was said to be by Sir Francis Grant, but it is not listed in his comprehensive 'Sitters Book' (copy of original MS, NPG archives), and it does not correspond with his work in colour or style. No convincing alternative attribution has been suggested.
Just before this catalogue went to press, the portrait was cleaned, and the signature of Andrew Geddes, the Scottish portraitist, was uncovered. There is no record that Geddes ever painted Lady Stirling-Maxwell and her sister, and the identity of the sitters has now been called into question. The doubts raised by the discovery of the signature are reinforced by the evidence of costume. On this evidence, the portrait must date from after 1835, when both Lady Stirling-Maxwell and her sister were married; such portraits of sisters were rarely painted after marriage.
Geddes is recorded as having painted two double portraits of sisters [1]. The first represents Lady Mary and Lady Gwendaline Talbot, daughters of the 16th Earl of Shrewsbury, who became, respectively, Princess Doria Pamphili Landi and Princess Borghese. The portrait was painted in Rome around 1829, and there is a compositional drawing for it and a study of the head of Lady
Gwendaline in the National Gallery of Scotland. Neither study ties with the NPG portrait, and, in any case, the evidence of costume mitigates against a date as early as 1829. The second recorded portrait is of Alexina Nisbet and Catherine Hepburne Lindsay, daughters of the Hon Charles Lindsay, who was the second son of the 6th Earl of Balcarres and the 23rd Earl of Crawford. This portrait was painted in 1838, when Catherine was sixteen (b. 1822), and Alexina slightly older. It is difficult to be certain of the ages of the two sitters in the NPG portrait, but 1838 would agree excellently with their costume. The present Earl of Crawford has confirmed that no portrait of Alexina and Catherine Lindsay by Geddes is in his possession or that of his immediate family. The NPG portrait has, therefore, been tentatively identified as the Lindsay daughters, although it cannot be substantiated until more evidence comes to light.

1) See 'Memoir of the Late Andrew Geddes' by Adela Geddes, 18 (Victoria and Albert Museum Library, Box 195 C), and The Etchings of David Wilkie and Andrew Geddes by David Laing, 1875.

Purchased from Knight, Frank and Rutley, by Lady Wavertree, a descendant of the sitter, and presented by her, 1951.