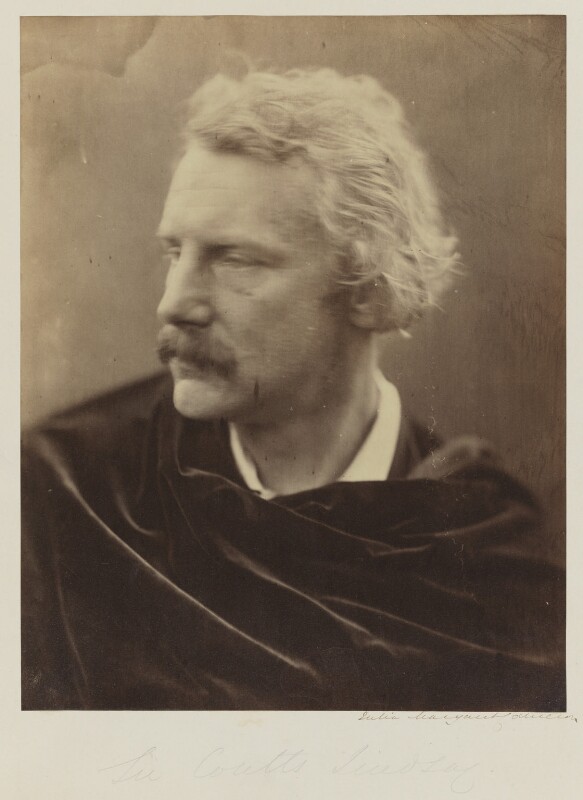 This is one of three images taken and printed by the photographer at Little Holland House, the Kensington home of her sister Sara Prinsep. A duplicate print is inscribed ‘Lawn of Little Holland House 1865 / Sir Coutts Lindsay’.[1] All three images were probably taken outdoors in May 1865, when Cameron established a temporary studio at the house in order to photograph celebrities in the art world; other sitters included Coutts’s younger brother, Col. Robert Loyd-Lindsay, and his wife Harriet, Robert Browning, William Michael Rossetti and Henry Cole, to whom Cameron wrote that in one day she had taken twelve portraits.[2] This image and one variant were registered for copyright on 19 July 1865.[3] The variant full-profile image (see ‘All known portraits, Photographs, 1865 (b)’) is included in an album containing 142 prints given to Lindsay by Cameron, inscribed ‘For / Sir Coutts Lindsay / Every Photograph in this Book is from Life and is Printed as well as taken by / Julia Margaret Cameron’.[4]

Sitter and artist were socially well acquainted and Lindsay was a long-standing admirer of Cameron’s sister Virginia, Countess Somers. Here he is depicted in Cameron’s favoured soft-focus close-up mode against an indistinct background, wrapped in a velvet cloak that suggests a romantic poet/artist and ‘marks him as bohemian’.[5] Lindsay was accustomed to dressing ‘in costume’: he once attended a ball as Van Dyck, and around the same time as the present work he sat to David Wilkie Wynfield wearing what may have been ancestral armour (see ‘All known portraits, Photographs, early 1860s’). In other respects his appearance here accords with descriptions in the year of his marriage (1864) by his wife’s aunt, Charlotte de Rothschild, who wrote: ‘Sir Coutts has very handsome features and a decidedly agreeable expression, but he is very peculiar-looking, his hair being perfectly grey.’ She added that he ‘talked of nothing but art and pictures’.[6]

it is strange how much more ‘painterly’ the photograph of Sir Coutts Lindsay appears when compared with the watercolour [NPG 2729] … Here in order to create a feeling of timelessness, [Cameron] has swathed her subject in rich velvet, the texture becoming more evident as the light rakes across the front folds, pulling our eyes back into the depths of the image. Underneath this lush cloak shines a white collar, revealing beneath it a more delicate and youthful neck than the stiff, peach-coloured trunk suggested in the watercolour. Lindsay’s light tousled hair, with its unruly curls, sweeps back to reveal a wide and deeply furrowed brow. He has the same distant, abstracted gaze as in the watercolor, and below the dignified, quasi-military moustache his chin is rigidly set.[7]

Reproductions of other prints of this image
Weaver 1986, p.72 (from Overstone Album print).