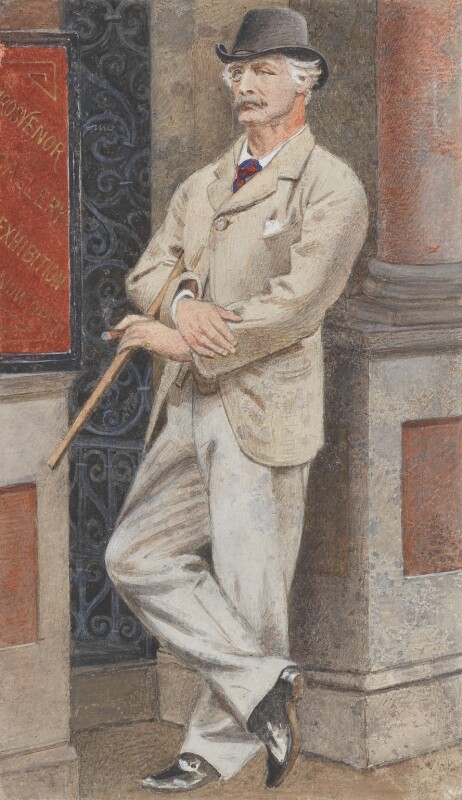 Sitter and artist – watercolourist Joseph Middleton Jopling– became acquainted through the Volunteer movement and the campaign to restore Warwick Castle. In 1874 the artist painted the sitter’s wife Blanche (NPG 5401) and the following year Lindsay stood godfather to Jopling’s son together with John Everett Millais. For some years the artist and his wife Louise Jopling were close friends of the Lindsays, socializing in London and Scotland, and all four exhibited at the Grosvenor Gallery.[1]

The drawing shows the sitter in nonchalant pose outside the gallery entrance, with his cane, monocle and trademark cigar; the sign on the left reads: ‘Grosvenor / Gallery / Exhibition / Now Open’. This finished and carefully worked portrait is hardly a caricature but was included in the long-running Vanity Fair cartoon series, for which it was engraved by Vincent Brooks, Day & Son, and published on 3 February 1883. As the format is comparable to other Vanity Fair portraits, it is assumed that this drawing was commissioned for the series and was executed a short time before publication. When published the image was simplified, through the omission of the architectural details of the left pillar and nameplate; it is therefore possible that the watercolour was done independently, rather than to commission, and adapted by the lithographers, although it is now mounted and inscribed in a similar fashion to other Vanity Fair portraits. The following week, Vanity Fair published Jopling’s caricature of Sir Henry Montague Hozier (then secretary of Lloyd’s); a month later Louise Jopling’s picture of Ellen Terry as Portia was a star exhibit at the Grosvenor G.

Born nine-and-fifty years ago, Sir Coutts Lindsay has played an active and varied part in the world. Originally an officer in the Grenadier Guards, he added to a taste for soldiering a love of art and languages; and having, during his efforts to become a painter, become an Italian scholar, he was appointed during the Crimean War to command the Italian Legion. But it is less as a soldier or an artist than as a friend of the arts that he has become distinguished. A few years ago he founded the Grosvenor Gallery with the object of affording a larger field for the exhibition of pictures; and he has given hospitality on its walls to many artists of talent whose peculiarities would have prevented them, perhaps for ever, from gaining admission to the Academy.

Sir Coutts owes much to the ladies. He succeeded to his baronetcy through his mother, the daughter of the first baronet Sir Coutts Trotter; and he married the daughter of the first Miss Rothschild to marry a Christian, who brought with her a large fortune. He is himself, however, a man well fitted to be popular; without being conceited, he has a proper opinion of himself; he speaks well without ever being tiresome or garrulous; his knowledge is considerable, and his manners charming.[2]

According to Rideal, ‘Jopling’s watercolour presents us with an intimate record of a dapper man about town: shiny shoes, cigar, signet ring, monocle, hat, handkerchief and jolly tie make a telling list, while Lindsay carries his walking stick slung under his arm like a gun.’ She quotes from the operetta Patience about ‘a pallid and thin young man … a greenery-yallery Grosvenor Gallery / Foot-in-the-grave young man’, and comments:

Although Lindsay himself is not so very young here, he does indeed appear peculiarly lifeless, like a character from an illustrated colour magazine. There is a certain resolve in his stare, though, and a conscious elaboration in his graceful, nonchalant pose, but overall the picture seems slight in its characterization beside the sensitivity of Cameron’s portrait [NPG P52].[3]

With Vanity Fair to unknown date; bought with large group from Maggs Bros 1934.