1 of 3 portraits of Eliza Roberts 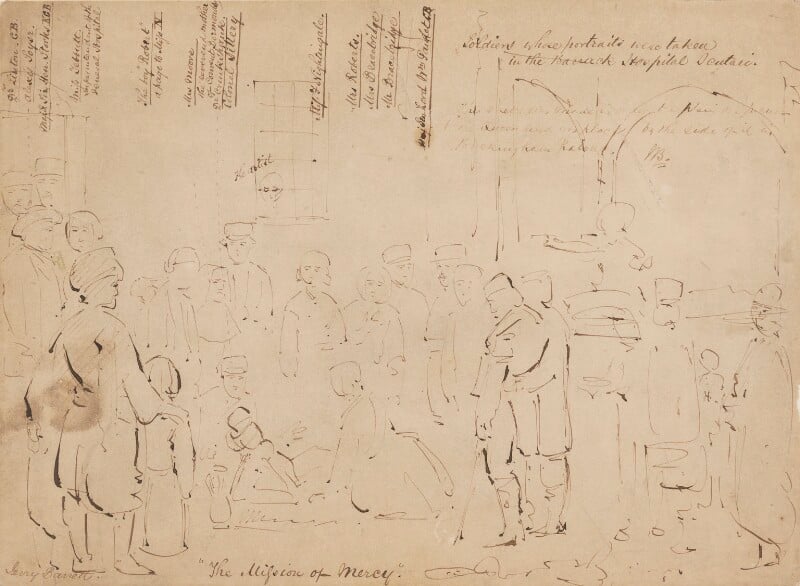 Inscr. throughout in iron gall ink:
signed lower left: ‘Jerry Barrett.’;
titled below centre: ‘“The Mission of Mercy”’;
vertical inscriptions at top, from left to right:
‘Dr Linton. CB. / Alexis Soyer. / Maj.G. Sir Hen. Storks KCB / Miss Tebbutt. / Superintendent of the General Hospital / The boy “Robert” / a page to Miss N / Mrs Moore / the Reverend mother of Convent Bermondsey / Dr Cruikshank. / Colonel Sillery / The artist / Miss F Nightingale. / Mrs Roberts. / Mrs Bracebridge / Mr Bracebridge / Maj Gen Lord Wm Paulet CB’;
two horizontal inscriptions, upper right: ‘Soldiers whose portraits were taken / in the Barrack Hospital Scutari’;
‘This sketch was made in order to explain the picture / to the Queen and was placed by the side of it / in Buckingham Palace. / JB’.

This is Jerry Barrett’s rough key to his painting The Mission of Mercy: Florence Nightingale receiving the Wounded at Scutari, 1857 (NPG 6202). It was drawn for a single, specific occasion: the viewing of the painting by Queen Victoria, as stated in his inscription at top right: ‘This sketch was made in order to explain the picture / to the Queen and was placed by the side of it / in Buckingham Palace. / JB’. Barrett’s inscriptions on the key confirm the integrity of his Crimean painting project, indicating that even the groups of wounded men at right – ‘Soldiers whose portraits were taken in the Barrack Hospital Scutari’ – were life drawings. The painting made two journeys to the palace, as the Queen was first too busy and then in Manchester visiting the Art Treasures Exhibition. She viewed it on 4 July 1857 or shortly afterwards. Barrett described these events to the dealer Thomas Agnew, who purchased the picture a month later. [1] The following year Agnew published a key plate to the print, after an untraced intermediate drawing by Barrett: see ‘Florence Nightingale, All known portraits, Paintings, sculptures, drawings and prints, Contemporary portraits from life, publ. 1858’.

NPG 2939a has been mistaken for a preparatory sketch for The Mission of Mercy, but when it entered the Collection in May 1938 its function was rightly understood. Initially, however, it was deemed unsuitable for the National Portrait Gallery’s primary collection. [2] In the end it was ‘thrown in’ with the purchase of a Barrett drawing of Nightingale that the Gallery Trustees were keen to acquire; see NPG 2939 for transaction details. The vendor was P.F. Armstrong of Messrs Harry Armstrong & Sons, Kings Road, London, and the sale was handled by the Palser Gallery. After acquisition Barrett’s sketch key entered the Gallery’s reference collection. [3]

1) Letter from J. Barrett to T. Agnew, 3 July 1857: ‘Before the Queen went to Manchester I went to the Palace and ascertained that in consequence of the multitude of different ways in which Her Majesty had been occupied my picture had not been seen; I obtained an interview with Colonel Phipps (previous to which I had been told that he desired it might remain in the Palace) he said it would do just as well if I took my picture home and returned with it after the Queen had been to Manchester, which I decided to do; I have accordingly written again to Colonel Phipps and my picture goes to the Palace tomorrow morning’ (Scrapbook relating to ‘Queen Victoria’s first visit to her wounded soldiers’, NPG Archive, NPG46/63/2/1/1).
2) Letter from H. Hake to G.D. Thomson, 12 Apr. 1938, NPG RP 2939/2939a.
3) NPG Report of the Trustees 1938–9, p.6.