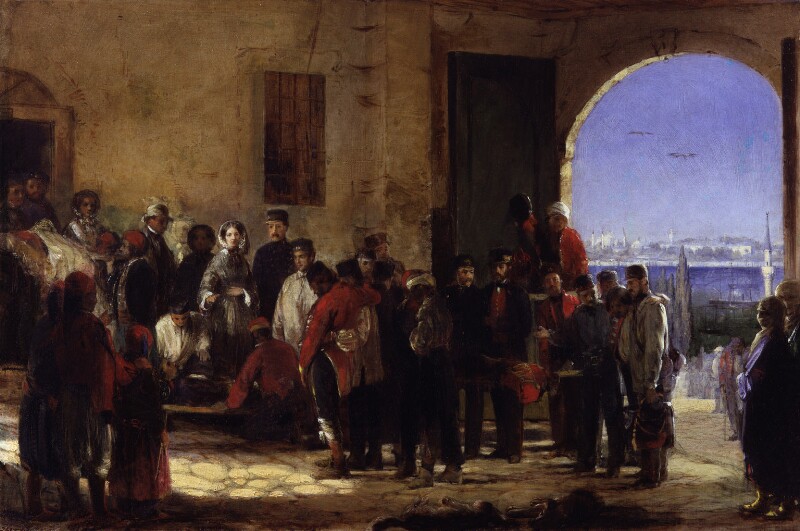 After the London success of his Crimean subject, Queen Victoria’s First Visit to her Wounded Soldiers, 1856 (NPG 6203), Barrett’s ambition was to paint ‘on the spot a picture of the wounded soldiers in hospital being nursed by Florence Nightingale’. [2] He set out for Turkey in spring 1856 with a friend, Henry Newman. The war was over but the Barrack Hospital at Scutari remained busy, and here in Newman’s words ‘Jerry paints all day long, having as models soldiers with the very coats, &c., which came down from the battlefields – torn, cut, blood-stained. We also draw from old Turk carriers, called hamels, who helped to bring up the disabled from the boats. The people who call upon us and watch the work are all military men […] and they take a glass of bottled ale to the success of the picture.’ [3] After much looking, Barrett decided on a scene with Nightingale at its centre showing ‘the wounded soldier entering the hospital by the gate next the sea, thus gaining a scene of great interest, and having a full view of the Bosphorus and the vessels which are at anchor upon it, Constantinople forming the distant background’. [4]

All this time Nightingale had been in Crimea. On her return to Scutari she agreed to meet the artist on 7 July. There followed two or three ‘interviews’, an exchange of letters and a viewing of ‘the picture’. But Nightingale refused to sit, and Barrett’s ambition to succeed where others had failed came to nothing. [5] She sailed for England on 28 July, two days before Barrett and Newman.

The figure of Nightingale was painted back in London. The head is loosely based on a photograph by Henry Hering (see ‘Florence Nightingale, All known portraits, Photographs, later 1856–early 1857, pose (a)’) but the position of the arm, extended and foreshortened, is borrowed from the figure of John the Evangelist healing a sick man in Raphael’s cartoon The Healing of the Lame Man. [6] Other figures in NPG 4305 are undeveloped, and the groupings differ in the final picture. The war being over, there were no scenes of Nightingale receiving ‘fresh cargos of misery’ for Barrett to draw: his tableau vivant references the conflict, and Nightingale’s healing role within it, symbolically.

As well as NPG 4305 there was another (untraced) Barrett sketch, the same size but differently composed and dated 1857: see ‘Florence Nightingale, All known portraits, Paintings, drawings, sculptures and prints, Contemporary portraits from life, 1857’. The Gallery sketch is generally regarded as the one Nightingale saw in the barrack hospital studio at Scutari: see areas of pentimenti at the left of her figure, signs of wear on the unrelined canvas, and inscriptions and several old labels on the back of the stretcher. [7] As in the finished painting there are about thirty figures in the sketch, but fewer portraits, and more soldiers, bearers and Greek and Turkish figures.

Treasures from the National Portrait Gallery, five venues in Japan, 1995–6 (25).