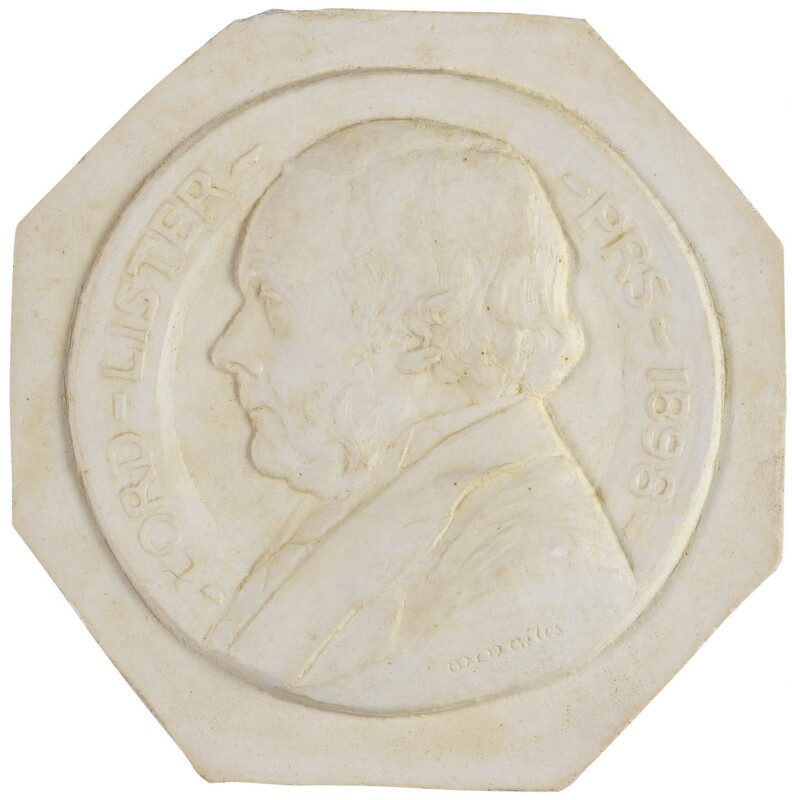 Lister’s profile appeared on several medals and large marble medallions but, unlike this profile by Margaret May Giles, they are all posthumous images. The delicate modelling of the features is no longer clear in the wax version, NPG 1897, but fortunately can still be read in the plaster, NPG 1897a, which is free of cracks. The casting process involved setting the circular medallion onto a larger, octagonal base.

Apparently Giles made more than one plaster of this medallion; the catalogue of the Lister Centenary Exhibition in 1927 lists: ‘Plaque, in plaster, of Lord Lister, executed at the request of Lady Lister by Miss Fleeming Jenkin, the friend of Robert Louis Stevenson.’ Then in the collection of Professor John Fraser, this plaster is untraced. [1]

In April 1921 Giles deposited plaster medallions of Lister and William Thomson, Lord Kelvin at the National Portrait Gallery, for inspection by the Trustees. After it was agreed to accept the wax versions, she planned to retrieve the plasters. [2] However, she never did; and although not formally acknowledged [3] these remained at the Gallery, in effect part of Giles’s gift, their value clear to all. For information on Margaret Giles and her work, see NPG 1897.

1) Wellcome 1927, p.143. Lady Lister died in 1893 (five years before the date on the medallion) and Fleeming Jenkin had no daughters, only three sons; this mangled piece of cataloguing is nevertheless useful for indicating the Lister–Fleeming connexion. For a photograph of the plaster in a circular ebonised frame see Wellcome Images, M0002779.
2) See letter from M.M. Giles to J.D. Milner, 27 Apr.1921, NPG RP 1896.
3) See NPG Report of the Trustees 1921–22, London, 1922, where only the wax medallions are listed.