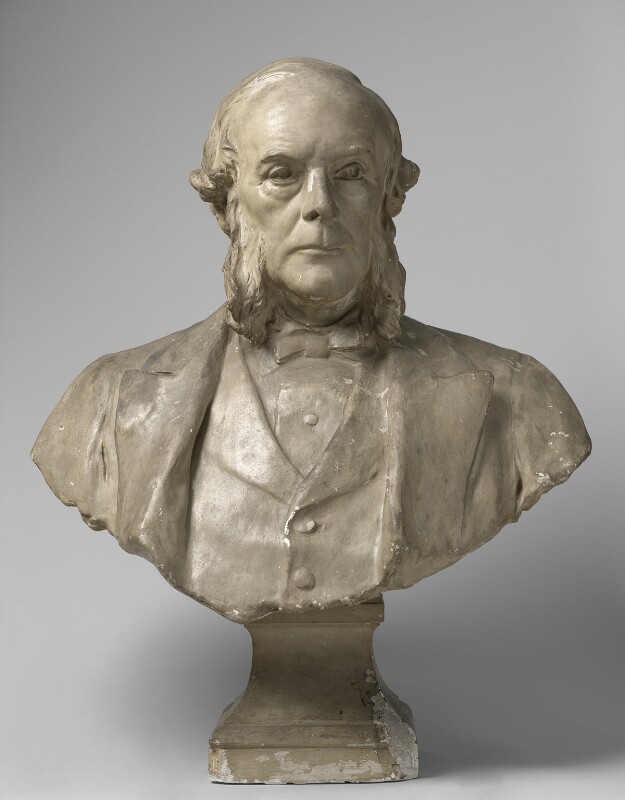 When Joseph Lister died on 10 February 1912 memorial committees were set up in two of the cities he had famously taught and operated in, Glasgow and London. Fellows of the Royal College of Surgeons of England were active on the board of the London-based Lister Memorial Executive Committee, the aims of which included the commission of two portrait memorials of Lister. The commissions were ultimately both awarded to Sir Thomas Brock, and unveiled in 1915 and 1924 respectively; see details below, and see ‘All known portraits, Paintings, drawings, sculptures and prints, Posthumous portraits, 1914–15, 1921–2’.

The RCS England was able to act much more nimbly, of course, when it came to commissioning a portrait of Lister for its own collection of portraits in Lincoln’s Inn Fields. Indeed on 25 June 1912, only four months after Lister’s death, the college council agreed to commission a marble bust of Lister from Brock for £250. [1] It is to this marble bust, dated 1913, that the life-size plaster NPG 1958 is related; and the plaster can be understood as the first in a line of portraits of Lister by Brock. The sculptor has shown him as he appeared in the photographs by Barrauds Ltd and by Elliott & Fry in the late 1890s, wearing the habitual frock coat and narrow bow tie knotted at a slant. Lister adopted this style in the late 1860s and barely altered it: ‘[Lister’s] dress was the habitual wear of the late Victorians – a black frock coat and waistcoat of the smooth broadcloth only used nowadays [1936] for evening wear, light grey trousers, and an upright collar of which the turned-down points kept in place the bow-knot of the invariable, narrow, black neck-tie.’ [2] Indeed, he wore it even in theatre, for surgical gowns were not standard practice in late nineteenth-century British hospitals: ‘Frequently [Lister] never even removed his coat, but simply rolled his sleeves back and turned his coat collar up, so that his white starched collar would not be made limp by the cloud of carbolic spray in which we then operated. Sometimes he removed his black frock-coat and an ordinary towel was pinned across his chest.’ [3]

The college council’s choice of Thomas Brock for the 1912 commission was uncontroversial. The sculptor’s reputation was as ‘a “safe” man, full of talent and ability’: [4] there was the ample evidence of his official portraits (many posthumous), particularly the recent Queen Victoria Memorial, which had earned him a knighthood; and he had already worked for the RCS England in the 1880s and 1890s. [5] Brock’s subsequent Lister portraits were produced for the Lister Memorial Executive Committee. One, a ‘simple marble medallion’ bearing the surgeon’s profile, was unveiled at Westminster Abbey in 1915. The second one, a granite and bronze monument unveiled on Portland Place in 1924, incorporated a version of the 1913 bust, in bronze and colossal in scale. [6] Thus the plaster NPG 1958, which had stayed in Brock’s studio, was used to plan the Lister monument also.

Soon after Brock’s death on 22 August 1922, his son and executor Frederick Brock presented the plaster bust of Lord Lister, and one of Lord Leighton (see NPG 1957), to the National Portrait Gallery. He wrote: ‘It was my father’s wish that these busts should be given to the Nation, and it would therefore be quite correct to describe them in the way you suggest, namely as “Presented October 1922, in accordance with the sculptor’s wish”.’ [7] Although Brock junior had organised ‘cleaning and repairing’ of the plasters prior to delivery to the Gallery in 1922, [8] a few weeks after its acquisition the one of Lister was sent to the Victoria & Albert Museum’s Department for the Sale of Casts for ‘cleaning and re-colouring’. [9] The cast went back to the museum again in 1927, for casting into bronze; see NPG 1958a.