1 of 3 portraits by Sylvester Brounower 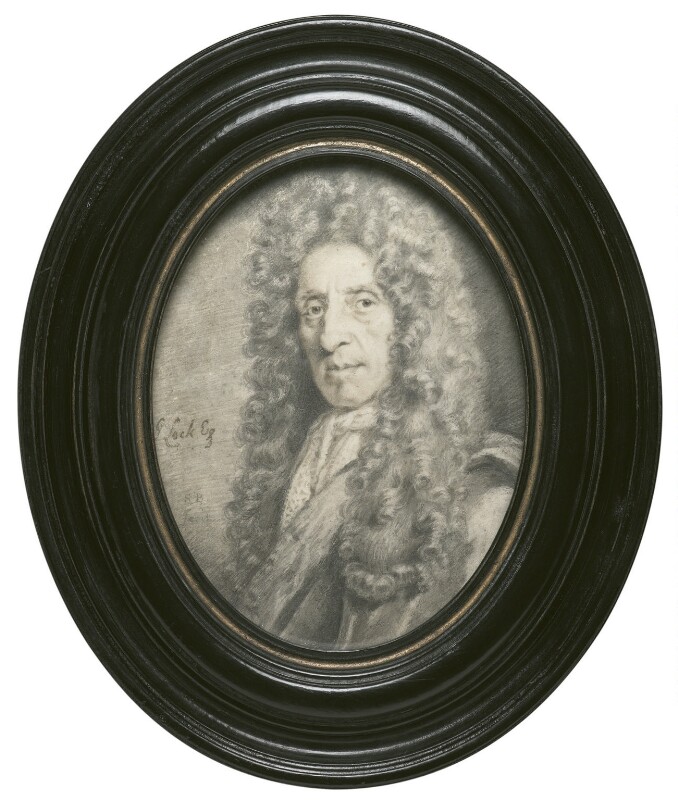 Signed centre left: S.B./fecit and inscribed above (said to be in the hand of Arthur Onslow): J. Lock Eq.

NPG 4061 was acquired mounted inside the lid of an ivory and tortoiseshell box containing a note:

This original drawing and very exact res/emblance of the fa/mous Mr Lock was given/to me Francis/Cudworth Masham Esq. [1] who/was bred up under him [signed] A. Onslow.
Brounower, a Swiss, met Locke at Lyons in 1678 and was employed as his valet and amanuensis until 1696; he died in 1699/1700. [2] His ability as a draughtsman is not well established: apart from copies of costume pieces, [3] there are two other known portraits and a third attributed. [4] The uncomfortable resemblance between NPG 4061 and the heads by Dahl (NPG 114 and 5385) suggests it may have been copied, despite Vandrebanc’s 1694 engraving describing Brounower’s drawing as ad vivum. [5] NPG 4061 seems to resemble more closely NPG 114 in the fold of the neck-cloth. On 1 November 1698 Brounower mentioned to Locke ‘my Copy of your Picture’. [6]
The date of 1685 proposed for NPG 4061 by Cranston is unsupported. Locke and Brounower were then in Holland (and the only portrait of Locke known before that date, by Greenhill, see NPG 3912, shows a much younger man). In NPG 4061 Locke seems to be the same age as in the Dahl portraits.
A small half-length painting of Locke at Christ Church was attributed to Brounower by Mrs Poole. [7]

1) Francis Masham (1686-1731), only child of Sir Francis Masham by his second wife; Locke lived in the Mashams’ house, Oates [Otes], High Laver, Essex, from 1691 until his death and was particularly fond of the boy, whom he called ‘Dab’ (and to whom he left £3000 in trust).
2) See Locke Corr., I, p 628n4.
3) In 1687 Brounower copied 26 draughts of the inhabitants of several remote parts of the world, especially the East Indies … ‘For the excellency of the drawing I will not answer’, wrote Locke, ‘they being don by my boy, who hath faithfully enough represented the originals they were copyed from … you must excuse them if they be not excellent pieces of painting’ (12 August 1687, Locke to Charleton; Locke Corr., III, no.951).
4) An unknown man, signed S. B. fecit, Bayne-Powell sale, Sotheby’s, 11 October 1994, lot 1; lot 2, an older unknown man, attributed to Brounower (both plumbago, oval, c.11 cm high). Vertue (G. Vertue, Notebooks, Wal. Soc., XVIII, 1930, p 29) mentioned a ‘picture of Vandeest the Landskip painter in the hands of Mr Forster drawn by him in black lead from a drawing in the same manner by Brown over’.
5) Locke paid Vandrebanc £3 on 29 June 1693, presumably, as de Beer suggests, in payment or part payment for the engraving (E. S. de Beer, ‘Locke’s Portraits’ in The Correspondence of John Locke, VIII, 1989, Appendix I, p 446).
6) Locke Corr., VI, no.2505.
7) Mrs R. L. Poole, Catalogue of Portraits in the possession of the University, Colleges, City and County of Oxford, III, p 39, no.95; ‘based on the Nutting engraving after Brounower’ (NPG archive: Descriptions of Portraits xiv, no.25; in 1919 with John Anderson, NY), bought Christ Church 1921.

1 Writer and designer, eldest daughter of the 5th Earl of Rosebery.
2 There were two other tortoiseshell boxes in the sale, one with a silver portrait medallion of Cromwell, the other with a cameo of Lord Wellesley (lots 33 and 34).

P. Vandrebanc 1694 (front. to 2nd ed. of Locke’s Essay); J. Nutting, early 18th century; both in reverse and lettered Sylvester Brounower ad vivum delin: [differing in folds of gown which are simplified in NPG 4061] with arms of Lock [per fesse az. and or, a pale counterchanged, three falcons rising of the second].