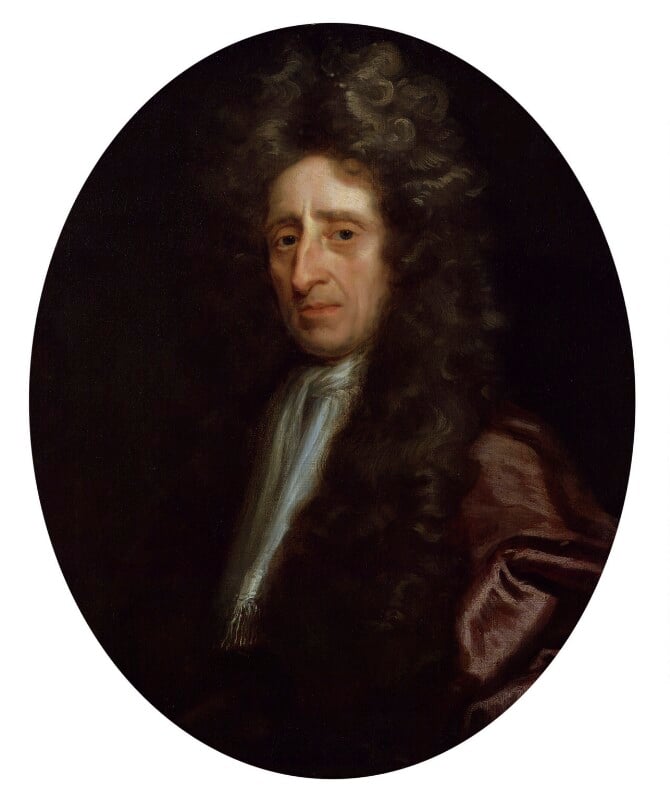 Vertue records from ‘J. E.’s Epigrams’ of 1700, under the title ‘the Effigies of Mr Lock by Dahl’, the couplet ‘Here you beholds the Image of a Sage/The Ornament and Wonder of his Age’. [1] This is, apparently, the only contemporary printed reference to Dahl having painted Locke. The NPG portraits were not engraved and Dahl is not mentioned in the Locke correspondence.
Both NPG 114 and NPG 5385 appear to be by Dahl. [2] The latter, inscribed and dated 1696, is probably a replica and NPG 114 the original; there are minor differences in wig, drapery and stock. The drawing by Brounower NPG 4061 appears to derive from this Dahl pattern (it bears a closer, but not exact, resemblance to NPG 114) and, since it was being engraved in 1693-4, implies a preceding date for NPG 114 (see NPG 4061).
The earliest provenance of NPG 114 is uncertain. There was a 19th-century label on the verso (now separately preserved):

John Locke by Kneller - In Testamony of Regard to His Friend Paul D’Arand of Putney Surry The Maternal Ancestor of its present Possessor, The Revd. George Coxe, of Twyford, Hants.
which could imply that Coxe acquired the portrait in memory of his D’Aranda ancestors, rather than from them.
A drawing of the Dahl head by Jonathan Richardson (probably after NPG 5385, rather than NPG 114) in the British Museum (1902.0822.23) is inscribed by the artist’s son, verso By My F[athe]r. fr[om]. S. Godfrey [Kneller]: when a learner. [3] A second Richardson wash drawing of the same head was acquired by the Bodleian Library in 1978. Despite the Richardson inscription and Coxe’s label, an attribution to Kneller seems impossible.