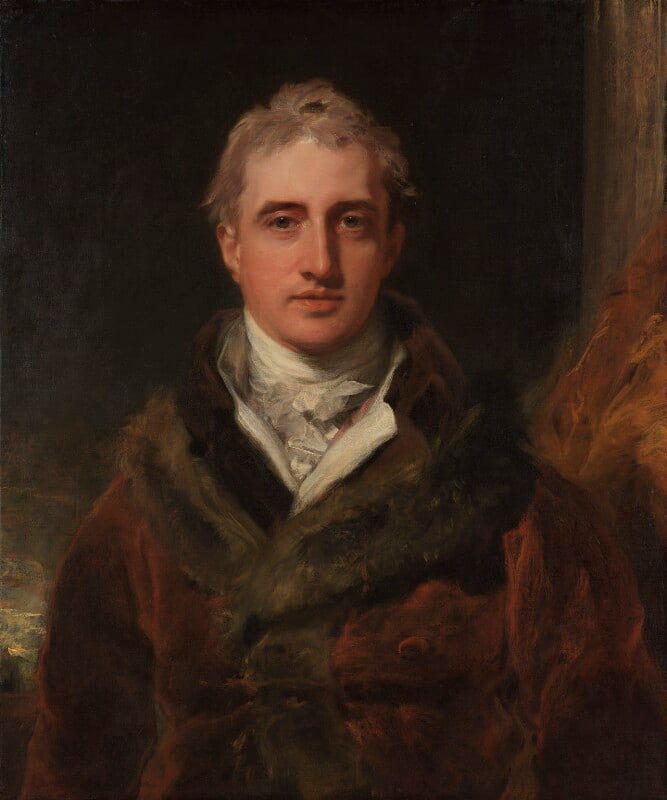 The portrait was formerly assumed to have been a present from Castlereagh to his old friend Clancarty but accounts in the Clancarty family records reveal it to have been a purchase, Clancarty paying Lawrence £45 in two equal instalments, the last dated 27 January 1810 (letter from his great-great-grandson, the Hon Greville Le Poer Trench, 15 November 1961 in NPG archive). It was exhibited RA 1810 when Hazlitt denigrated it in 'The Catalogue Raisonné' as being '... in a fashionable coat, with his hair dressed in the fashion, in a genteel posture like one of his footmen, and with the prim smirking aspect of a haberdasher' (Works, IX, p 315). Copies are at Chatham House, Travellers' Club and (by Egan) at Wynyard Park. Lawrence painted three other portraits of Castlereagh, exhibited RA 1794, 1814 and 1821 (Kenneth Garlick, ‘Catalogue of Paintings, Drawings and Pastels of Sir Thomas Lawrence’ in Walpole Society Journal, XXXIX, 1964, p 123-30).
The 1814 version was the subject of a diatribe by Hazlitt in the Morning Chronicle, 3 May 1814, attacking the insipidity of Lawrence's portraits in general and the Castlereagh one in particular: '... it is not a likeness. It has a smug, upstart, haberdasher look, of which there is nothing in Lord Castlereagh. The air of the whole figure is direct and forward; there is nothing, as there ought to be, characteristically circuitous, involved and parenthetical in it …' (Hazlitt, Works, vol.18, p 18).

Stipple by Meyer for Contemporary Portraits, 1814 (example with Castlereagh's autograph in NPG).