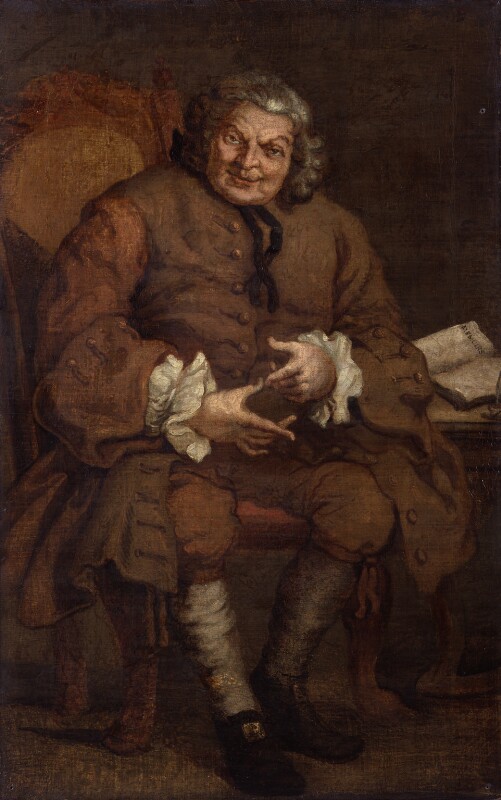 Inscribed round the back of the stretcher: Simon Fraser Ld. Lovat/Executed on Tower Hill for/High Treason/1745. [1]

Claimed as an original Hogarth, the portrait is crudely painted and demonstrably a copy. [1] A drawing in the Harris Museum and Art Gallery, Preston, possibly from Weardon Hall, a seat of the Farington family, [2] is said to have been acquired by Lovat's escort Major Gardner, whose wife was a Farington ancestor. [3] Although now cut to a silhouette and possibly damaged, it is surely autograph; [4] the style is very close to drawings such as 'The First Stage of Cruelty' and the portrait of John Wilkes. [5] As it has an unusual amount of cross-hatching, the Harris Museum drawing seems to have been finished up for the etching, lettered Drawn from the Life and Etch’d ... by Willm Hogarth, Publish’d ... August 25th 1746. In the etching the buttons are shown on the wrong side of the coat, and the gesture, said to show him counting the clans that fought for the Pretender, [6] is similarly reversed, the sitter counting with his left hand. NPG 216 also shows the buttons on the wrong side and the gesture as left-handed; it is thus presumably derived from the etching.
It seems unlikely that Hogarth had much opportunity for painting Lovat from life. According to Nichols, a drawing or drawings were taken at the White Hart Inn, St Albans, on 14 August 1746 when, at the invitation of Dr Webster, a local physician, Hogarth met Lovat who was on his way to London for his trial. Another version, mentioned by the Rev. W. Harris to Mrs Harris in a letter dated 28 August 1746, claims that Hogarth invited himself to the inn. [7]
The same head appears in a drawing in the British Museum possibly by J. Ireland. [8] A posthumous oil, the gesture left-handed, with the dealer Rodd in 1827, [9] repeats the satirical coat of arms – beheading block, two headmen's axes, triple gallows and a hangman's noose – shown in one of the later etchings after Hogarth. [10] A picture lent by Lord Lovat to the 'Historical Portraits Exhibition', Aberdeen, 1859 (93), described as 'Painted in the Tower previous to his execution', was apparently a version.