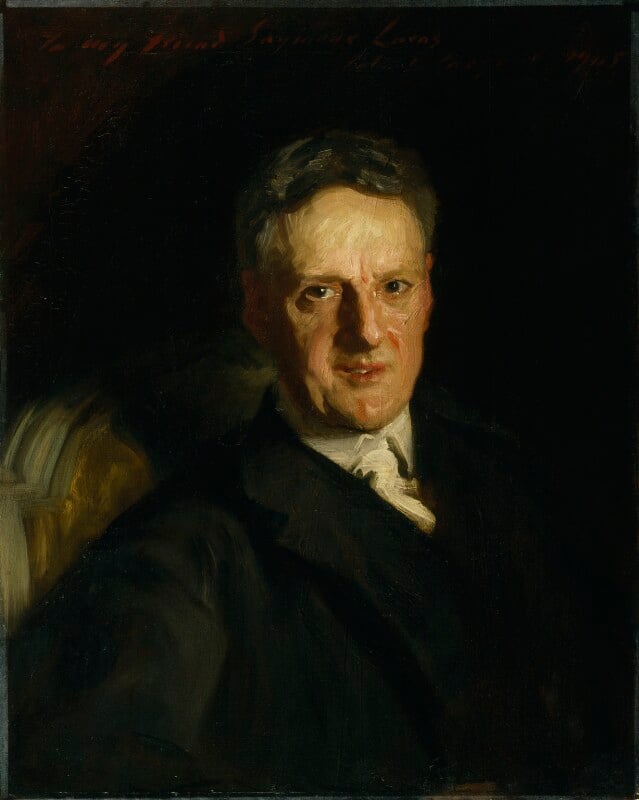 It has been suggested that NPG 5219 and an oil of Charles Napier Hemy (priv. coll.) – both bust portraits inscribed ‘to my friend’ and painted in 1905 – may have been produced as an exchange in kind between fellow Academicians, since neither Lucas nor Hemy was a special friend nor in the league of Sargent’s usual sitters. Certainly there was a painting by Lucas (and one by Hemy) at the Sargent studio sale in 1925.[1] The portrait of Lucas was exhibited at the New Gallery in 1906 and was warmly praised by, amongst others, the Art Journal (‘the sketch of Mr. Seymour Lucas is full of vitality, of momentariness’) and the Spectator (‘the construction of the head shows the hand of a master’).[2]

One’s first impression of Lucas was a well-groomed, somewhat horsey-looking little man, clean-shaven, with dark, penetrating eyes, which kindled with lively enthusiasm when discussing things that interested him. But when unsympathetic subjects cropped up […] it was easy to see his mind had wandered off to seek amusement elsewhere; and that is exactly the dreamy expression that has been caught so cleverly by Sargent’s genius.[3]

Lucas had been a visitor at the Royal Academy Schools since 1886; he was afterwards succeeded by Sargent. Frank Salisbury, who was a student during both tenures, described in his memoirs their bewilderingly different teaching methods, with Lucas insisting on the ‘necessity of selectiveness’ and Sargent on ‘accepting nature exactly as it was before him’.[4]

The painting belonged to Lucas’s daughter Mrs Grubbe and it was offered to the National Portrait Gallery by her daughter Mrs Hubbard in 1978.[5] She recalled: ‘I remember hearing it said that, when the portrait was suggested, Sargent picked up an old canvas and laid it in with great speed!’[6] The ancedote is borne out by a recent technical examination which detected a distinct, unrelated layer of paint beneath the Lucas portrait.[7]

The sitter; by descent to sitter’s daughter Mrs Marie Ellen Grubbe, and granddaughter Mrs Margaret M.J. Hubbard, who offered it as a gift to the NPG in 1978.