1 of 9 portraits of Samuel Lysons 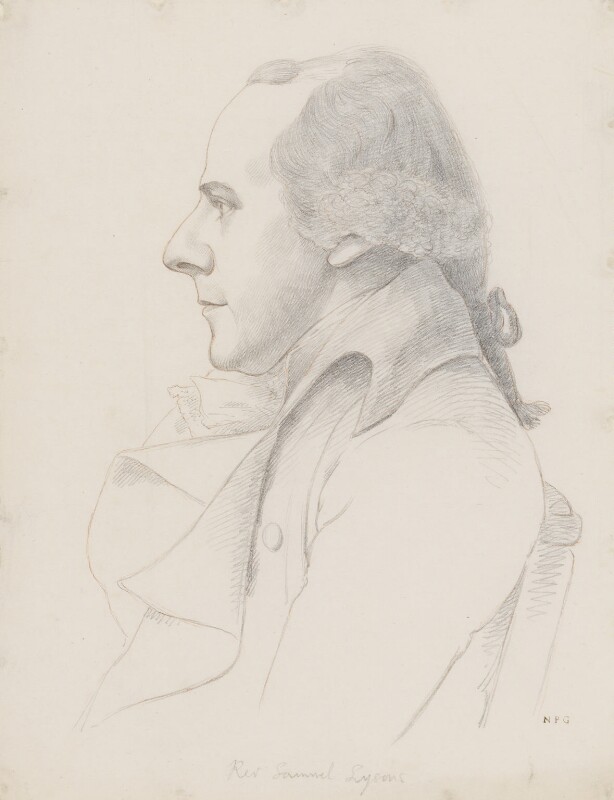 Dance's original drawing in the British Museum (Laurence Binyon, Catalogue of Drawings by British Artists ... in the British Museum, II, 4), dated 17 July 1793, was described in Farington's Diary of that date as 'a remarkable likeness'. His brother Daniel (Environs of London) was drawn by Dance on 14 December. William Daniell's tracings were used for the soft-ground etchings published undated in Additional Plates.

The tracings [NPG 3089(1-12)] were made by the engraver William Daniell as part of a project to publish George Dance's drawings in A COLLECTION OF PORTRAITS sketched from the Life since the Year 1793 by GEORGE DANCE, ESQ,. R.A. and engraved in imitation of the Original Drawings by WILLIAM DANIELL, A.R.A. They appeared as soft-ground etchings from 1802 in 12 monthly parts at one guinea each, finally bound into two folio volumes and published in 1814. Another issue of 50 copies, containing additional portraits, was published in 1854.
Joseph Farington, a friend of both artists, was interested in the work and frequently mentions sittings in his Diary. For instance on 11 March 1802: '... drank tea at Wm Daniells - copying Dances Heads in the soft ground. While I was there, in about 2 hours & half He copied Lord Dartmouths portrait.'
The tracings were part of a large collection acquired by Mr Appleby and offered to the British Museum, the V&A Museum, and the NPG. The NPG selected those not represented in the Gallery collection by drawings or engravings.

Messrs Appleby Brothers and bought from them 1940.