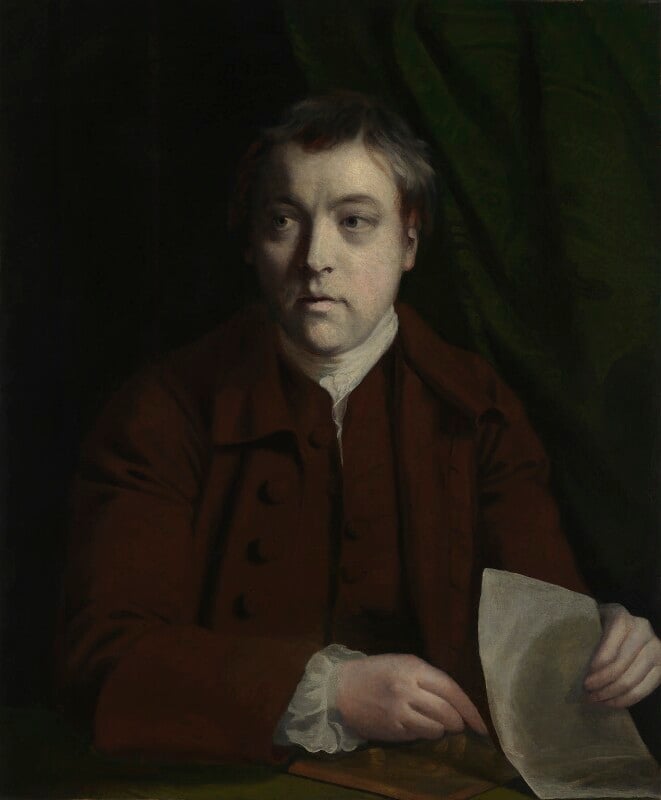 Identification of NPG 3123 rests largely on comparison with the self-portrait in the collection of Richard Bull which was engraved by Earlom (J. Chaloner Smith, British Mezzotinto Portraits, 1878-83, 28), inscribed Jac McArdel delin, 1765 and published by R. Sayer, 1771. The sitter is shown at work on his plate from Van Dyck's 'Time clipping the wings of Love' [1] and, despite the broader face and the marked pouches under the eyes, the appearance is fairly close to NPG 3123. There is also the consideration that if Reynolds were to paint any engraver it would surely be the mezzotinter of whom he said 'by this man I shall be immortalised'. [2] No references to payment occur in the ledgers, but McArdell, no doubt a frequent visitor to the artist's studio, may never have had a formal appointment. [3] Boswell, another close friend, was charged for his portrait although after six years, when the debt was still unpaid, Reynolds waived payment. [4] NPG 3123 is smoothly painted with deep shadows, and it is partly on style [5] and partly because the sitter book for that particular year is missing, that John Woodward suggested a dating of c.1756. [6] McArdell entered ‘Time and Cupid' at the first exhibition of the Society of Artists, 1760 (108). The sitter book for 1763 is also missing, but on style this would be too late. [7]

Traces of rose madder in the cheeks, suggesting the face was pinker; some wear and losses in the fingers, hands rubbed; originally a burin held in the right hand, the point still visible; small loss to right of face retouched; condition otherwise good; old varnish and discoloured retouchings removed; relined 1974; small pentimenti beside shirt ruffle and down the outline of his right shoulder suggest both have been moved slightly towards the centre.

Presented, 1942, by the National Art Collections Fund; presumably the picture sent for sale by Meade, Christie's, 12 March 1836, lot 12 - ‘McArdell, full of character' - bought in. First certainly recorded by 1884 when in the collection of Sir Gilbert Greenall, Bart; thence by descent to the Dowager Lady Daresbury from whom acquired, through Agnew's, by the National Art Collections Fund. [1] Possibly given by the artist to the sitter; the early history of NPG 3123 is not known; McArdell died intestate, and his property may have gone to his brother Philip of Dorset Street, Dublin, died 30 September 1777, whose will was among those lost in the Four Courts fire of 1922. [2]