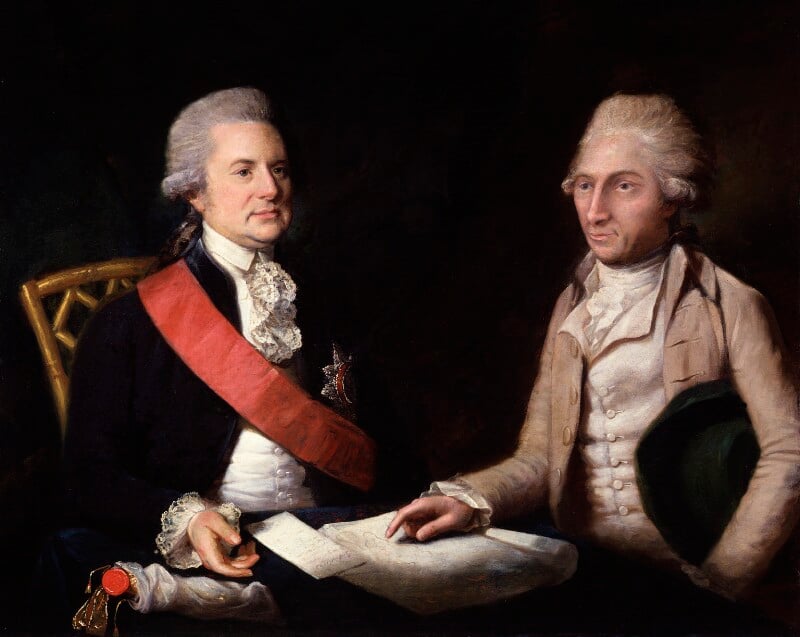 NPG 329 shows Lord Macartney as governor of Madras with his private secretary George Staunton, whom he had first met in Grenada in 1775. It is a much-damaged version of the double portrait formerly belonging to the Staunton family and now in an American private collection, [1] in which the map is inscribed Mangalore and the folded document Instructions/for/making Peace/with Tippoo Sultan. In September 1783 Macartney sent Staunton with two other envoys (Sadleir and Huddleston) to Seringatapam to negotiate a settlement in Mysore, where Tipu Sultan with his father, Hyder Ali (d. 1782), had harassed the British. Staunton succeeded in this mission at the cost of ceding the port of Mangalore, where the treaty was signed on 11 March 1784. Macartney was much impressed with Staunton’s diplomatic skill, telling Fox that he was a man ‘most capable of rendering essential service to the State of India’. [2] Staunton’s treaty was subsequently modified by Warren Hastings.
NPG 329 had been called Reynolds in 1850 and it was offered in 1871 as Gainsborough, [3] but Scharf convincingly attributed it to Abbott, remembering that the Staunton version had previously been offered in 1860 as Abbott. [4] NPG 329 particularly commemorates Staunton’s success, combining Macartney’s instructions of September 1783 with a reference to Mangalore. The Staunton version also suggests that Staunton’s head was painted with rather more interest than Macartney’s; the heads relate uncomfortably and neither looks at the other. Abbott, who was never in India, had arrived in London in 1784 and first exhibited at the RA in 1788; Staunton returned from India in 1784 and Macartney in 1785, and their double portrait as Indian officials must date soon after. Apart from the regrettable differences in condition, there are minor variations between the two versions: NPG 329 shows the folded document lying on the table instead of in Macartney’s right hand; Macartney’s waistcoat buttons are more visible, and the back of his bamboo chair is of a different pattern.
Abbott also painted a separate (related) half length of Macartney.

Macartney on the left with his secretary, George Staunton, on the right; on the table a red-wax sealed silk bag, a letter headed Instructions and an illegible map to which Staunton points.
Macartney: blue eyes, grey powdered hair, wearing a blue coat with the ribbon and badge of the Bath; sitting in a bamboo chair.
Staunton: grey eyes, white hair, wearing a cream jacket and white vest, a green hat under his arm.

1 See H. H. Robbins, Our First Ambassador to China, an Account of the Life of George, Earl of Macartney, 1908, p 456; P. Roebuck ed., Macartney of Lisanoure, 1983, p 306.
2 A label formerly on the verso reads: This Picture by Sir Joshua Reynolds was Purchased by me at Lissanoure Castle Co Antrim Ireland May 12 1850 when a Sheriffs sale took place at the suit of A Clarke against George Macartney Esqr/S Macartney Caldwell.
3 This ownership is implied by Scharf; among his papers relating to NPG 329 is a note that the Brady sale, Christie’s, 1 July 1871, did not include ‘the Macartney one. That was sold afterwards at Dublin’.
4 The London dealer (cf. R. J. B. Walker, National Portrait Gallery, Regency Portraits, 1985, I, pp 98, 201).