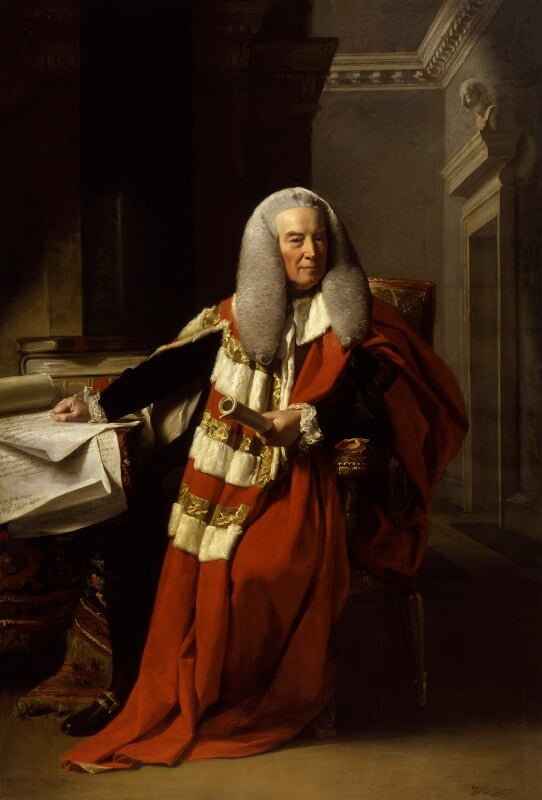 Although NPG 172 passed to Lord Lyndhurst, the artist’s son, the Morning Chronicle, 30 April 1783, asserted that it had been commissioned by Mr Justice Buller, who had greatly benefited from Mansfield’s patronage; [1] Holliday alleged that Mansfield sat ‘no less than four times to Copley, out of respect to Mr Justice Buller’. [2]
Although ultimately derived from the impassive figure of Mansfield in Copley’s Death of Chatham, NPG 172 is an animated and powerful portrait. A number of compositional drawings reveal Copley’s initial uncertainty; while the figure was always whole length, looking right, robed and seated, the body and arms were variously disposed. [3] The bust perched oddly above the door behind him is presumably intended for Pope, his 'friend and favourite', [4] of whom Mansfield had an unidentified bust at Kenwood. [5] When the portrait was shown at the RA in 1783, the Public Advertiser congratulated Lord Mansfield on the ‘apparent amelioration of his taste. As long as we can remember he has been in the worst hands, Ramsay, Martin and so on ... we do not despair of soon seeing him the Patron of Painters worth patronizing, Romney, Gainsborough and Reynolds’. [6]
A three-quarter length version from Inworth Hall was sold Phillips, 19-20 September 1951, lot 26; a miniature copy by William Birch dated 1785 is in the Harvard Law School and another, the date illegible, was sold Christie’s, Geneva, 28 April 1976, lot 156.

Grey eyes, grey full-bottomed legal wig, wearing a black suit and an Earl’s parliamentary robes; the manuscripts on the table are deliberately illegible; above the door, behind him, is a bust, probably of Pope.