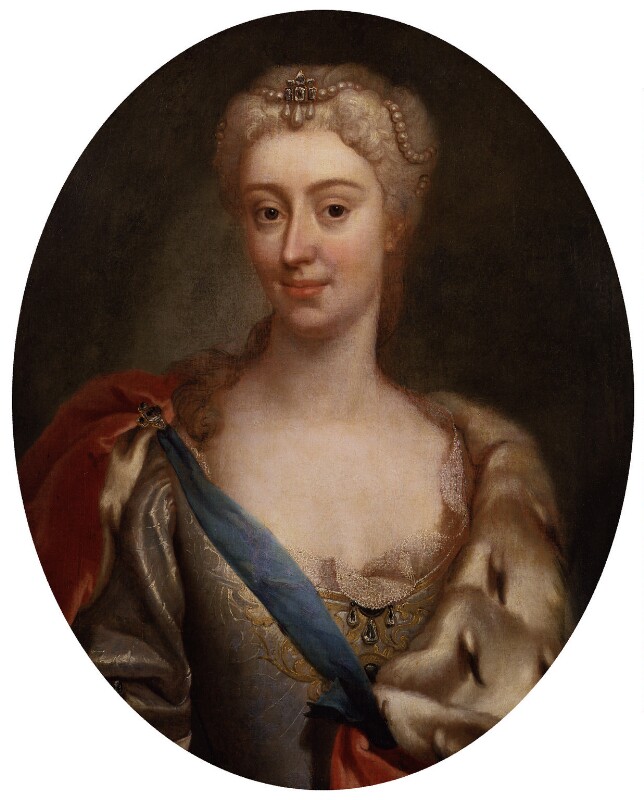 Acquired as a Trevisani, [1] NPG 1262 was also, at one time, given to Largillière. In the light of present knowledge neither attribution now carries conviction. A similar and superior portrait by Blanchet, signed and inscribed Roma on the back, was sold, lot 81, with companion portraits of her husband and their sons, the 'Young Pretender' and Cardinal York, the former signed and dated 1739, Christie's, 25 March 1966, from the collection of Lt-Col. G. H. Hay, Duns Castle, Berwickshire. Alexander Hay, an ancestor, was the brother of William Hay of Edington, [2] a Jacobite supporter who was apparently conducting negotiations with Blanchet, c.1738-41. [3] According to Harding, c.1804, the portrait was painted in France and sent by the sitter's husband as a gift to Hay of Drummelzier [4] but this is not borne out by the inscription. As in NPG 1262, the Blanchet appears to show Maria in Mary of Modena's pearls and the pearl-coloured gown and coiffe worn at her wedding. [5] Blanchet did not leave France until c.1728 which is too late for the costume and apparent age; the type is probably based on NPG 1262 or another like it. Other possible sources are the portrait in the Duke of Alba's collection (69) and a half length miniature sold as by Rosalba, Christie's, 7 November 1960, lot 50. [6] A number of life-size copies of the latter are known. The portrait attributed to Largillière in the collection of Mrs Colin Davy may also be connected with the group.

Rubbed, particularly in the lower part of face, and neck; some retouchings now discoloured.