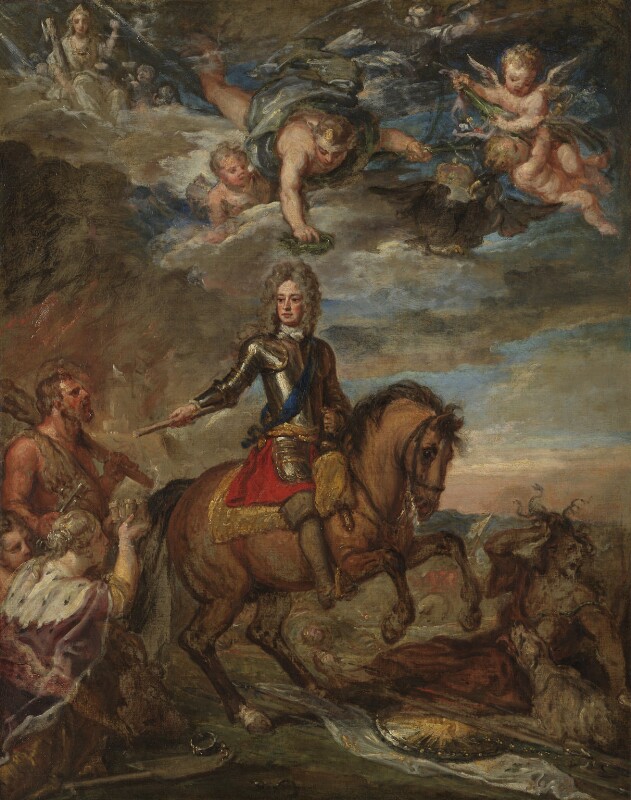 The original canvas inscribed verso: His Grace the Duke of Marlboroug../Painted by S:r Godfrey Kneller/soon after the Battle of Ramillies 17[06]/when Flanders & Brabant surrender’d.

On the left the figure of Hercules holding a club and key, and a woman with an ermine cape proffering a model of a citadel; on the right the figure of War/Discord, with emblems of war including Louis XIV’s sunburst shield, is trampled beneath the horse’s hooves; above, Victory/Mercury attended by putti crowns the Duke with laurel; Fame blows her trumpet and to the left sits Justice/Astraea with scales and Roman fasces.
A fine Rubensian sketch, described by Stewart as ‘one of Kneller’s most brilliant canvases’, NPG 902 is a modello for a larger composition intended to commemorate the victory at Ramillies (according to the inscription quoted above), but never executed (perhaps for political reasons). Stewart also suggested possible sources for individual figures: [1] the horse and Discord from Raphael’s Expulsion of Heliodorus (Vatican); Discord again from Rubens’ St Francis of Paola appearing to the Victims of the Plague (Dresden), and Victory/Mercury from Raphael’s God dividing the Land from the Water (Vatican Loggie).
NPG 902 may be compared with another (slightly larger) Kneller modello of 1708, Queen Anne presenting the Plans of Blenheim, made for a larger picture which the Queen intended to present to the Duke; political events then prevented the completion of the large design. [2]

[Perhaps with the sitter’s daughter, Henrietta, Duchess of Marlborough, and thence by descent to the Duke of Newcastle] Thomas Pelham, 1st Earl of Chichester, Stanmer; purchased 1892.