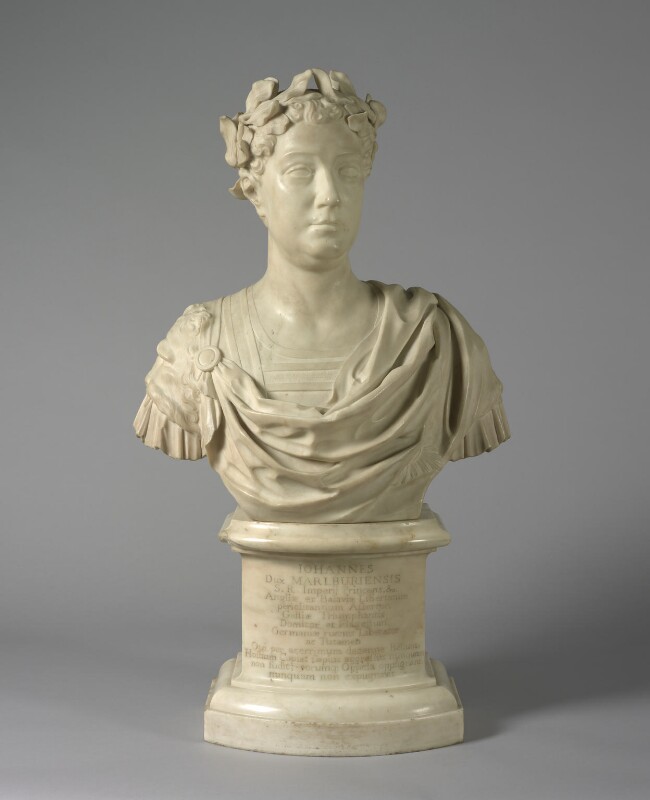 The back inscribed:
IOHN Duke of MARLBOROUGH
Prince of the Roman Empire, &c.
The Restorer of Liberties of
ENGLAND and HOLLAND
When in the most Imminent Danger.
The Subduer and Scourge
of FRANCE when in its
Height of Power,
The Deliverer and Protector
of GERMANY
when at the Point of Ruin.
Who through the whole Course
of a Ten Years Vigorous WAR
in Repeated Attacks
upon the Enemies Armies, and Continual
Assaults upon their Strong Towns
never once failed of Success
Battles gained ———————————— 5
Strong Towns that Surrendered without Siege 16
Strong Towns Besieg’d and Taken ———— 24
The front inscribed:
IOHANNES
Dux MARLBURIENSIS
S.R. Imperij Princeps, &c.
Angliae et Bataviae Libertatum
Periclitantium Assertor,
Galliae Triumphantis
Domitor et Flagettum,
Germaniae ruentis Liberator
ac Tutamen.
Qui, per acerrimum decenne Bellum,
Hostium Copias saepius aggressus nunquam
Non fudit; eorumq: Oppida oppugnans
Nunquam non expugnavit1
1 Cf. the inscription of the medal by Jean Dassier (Medallic Illustrations of The History of Great Britain and Ireland, British Museum, cxlv/7: ubi aderat ibi victoria. W. Eisler, The Dassiers of Geneva: Jean Dassier, 2002, p 269, no.7, illus. p 268.

A workshop repetition of the Rysbrack bust in the Ashmolean Museum which was presented to the Bodleian Library in 1730 by the Duchess of Marlborough. [1] Others (showing slight variations) are at Syon House (with a head of Medusa on the tunic), and from Wimborne St Giles, [2] and a third was listed at Peper Harow Park in 1925. [3]
Penny (loc. cit.) observed that this bust is ‘an abbreviation of the full-length effigy of the duke made for the tomb in the chapel at Blenheim’, and hence the ‘unhappy cutting of the Garter star’.

Transferred from the British Museum 1923.