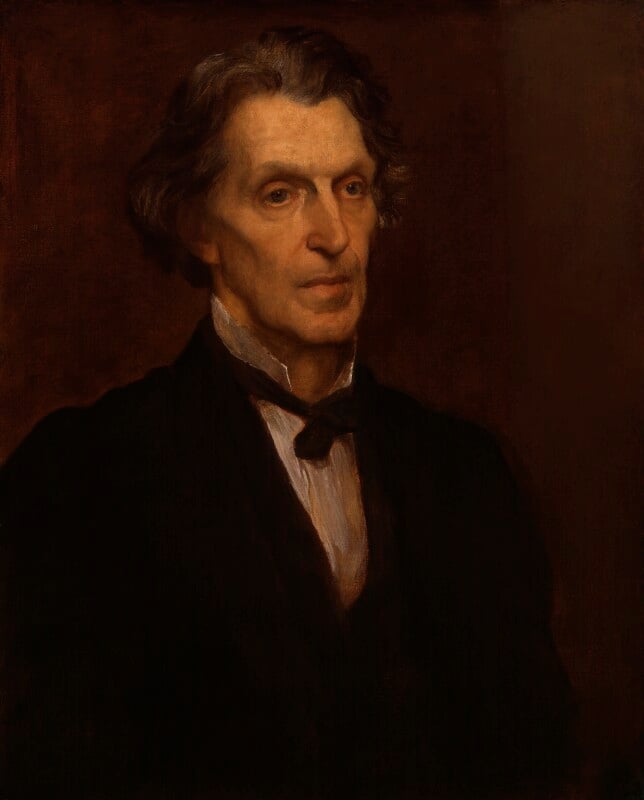 This is a replica of the portrait of Martineau by Watts of 1873 at Manchester College, Oxford, exhibited RA, 1874 (51), Winter Exhibition, Grosvenor Gallery, 1882 (149) and Royal Jubilee Exhibition, Manchester, 1887, 'Fine Art Section' (503), reproduced The Life and Letters of James Martineau, edited J. Drummond and C. B. Upton (1902), I, frontispiece, etched by P. Rajon, published Agnew, 1876 (example in NPG). The original portrait was subscribed for by Martineau's old pupils, thirty-seven of whom dined together on 24 June 1874, and formally presented it to Manchester New College. Watts expressed pleasure in painting 'so good and distinguished a man as Mr Martineau', but would only paint the head, as he considered modern costume 'not only so uninteresting, but so ignoble' (Drummond and Upton, II, 20). Several of Martineau's friends were disappointed with the portrait, feeling that Watts, who was painting Martineau at a time of ill-health, had misinterpreted his subject: 'We see before us the philosopher and the mystic ... but not the man of action and the prophet' (Drummond and Upton, II, 21). Watts frequently painted replicas of his portraits of famous people, with the deliberate intention of presenting them eventually to the nation.