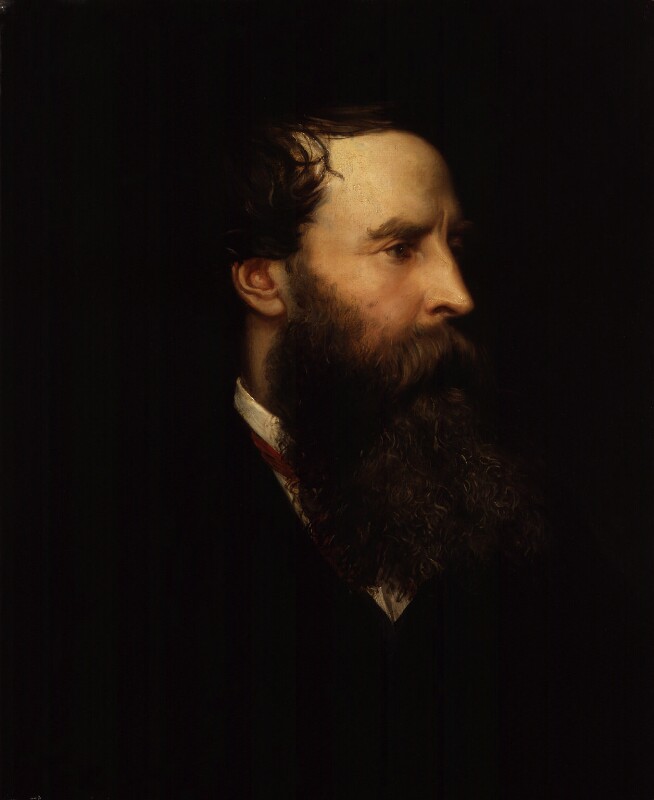 The link between Valentine Cameron Prinsep and George Mason was Frederic Leighton. Leighton first met Mason in Italy in 1853: Mason was twelve years older and had lived in Italy for many years, fighting with the patriots and developing a pictorial vision of the landscape around Rome. They became life-long friends. Leighton greatly admired Mason’s work, realized his unworldiness and looked out for him: ‘he recognized in his friend a lack of that essential instinct for self-preservation, and he felt impelled to protect him. For years, he nagged and encouraged Mason, pushed him to work, found him patrons, and when these failed, dipped into his own pocket.’ Mason for his part ‘not only adored but revered’ Leighton. [1]

Encouraged by Leighton, Mason moved back to England in 1858. From 1864 the family lived at various addresses in Hammersmith, in modest proximity to Leighton’s house in Holland Park. When William Blake Richmond first moved to Hammersmith in 1870, he was glad of Mason’s company: ‘We were lucky to have George Mason so near – it was like the old Roman days of intimacy; also Leighton, Watts, and Val Prinsep were not far off, and kind they were to the newcomers.’ [2]

Val Prinsep was one of Leighton’s closest friends, and they lived as neighbours at Nos 1 and 2 Holland Park Road. Although there are no accounts of Prinsep painting Mason it probably came about through Leighton’s agency. NPG 1295 is undated but probably belongs to the late 1860s. [3] Mason had long been in poor health, although this aspect is glossed over in Prinsep’s portrait. Giovanni Costa observed it on a visit in 1863: ‘[Costa] found that Leighton had in no sense exaggerated Mason’s condition. He was in such poor health, suffering principally from his heart, that he could only work a few hours a week, although he had several commissions in hand which Leighton had for the most part procured him.’ [4] Richmond also knew it in 1870: ‘[Mason] and I became great friends; almost every day for three years I saw and talked with him. Very ill he was, work was a great effort to him. His sensitive nature was never satisfied; he changed his designs from day to day.’ [5] Prinsep’s Mason is idealized, and his proud outline hardly relates to the bespectacled, sunken head seen in the 1869 photograph by John Watkins (see ‘All known portraits, Photographs’).

Intruigingly, at the time of Mason’s death the portrait was in the hands of the artist James Talmage White in Capri. [6] White returned it to Mrs Mason sometime after 1874, urging her to leave it to the National Portrait Gallery in her will. But in spite of Leighton’s best efforts Mason’s family continued needy and the picture was offered to the NPG for sale in 1901: ‘I thank Viscount Peel [chairman of Trustees] for the offer of £50 for the portrait of my father by Mr Val Prinsep’, wrote George V. Mason, ‘and although the sum offered is very small I accept it though quite think I ought to have had £100 for it.’ [7] In 1873, the year after Mason’s death, there was a studio sale (Christie’s, 15 Feb.) and an exhibition of his ‘collected works’ at the Burlington Fine Arts Club.

J. Talmage White 1874; Mrs Mary Mason and by descent to George V. Mason, from whom purchased by the Gallery, May 1901.