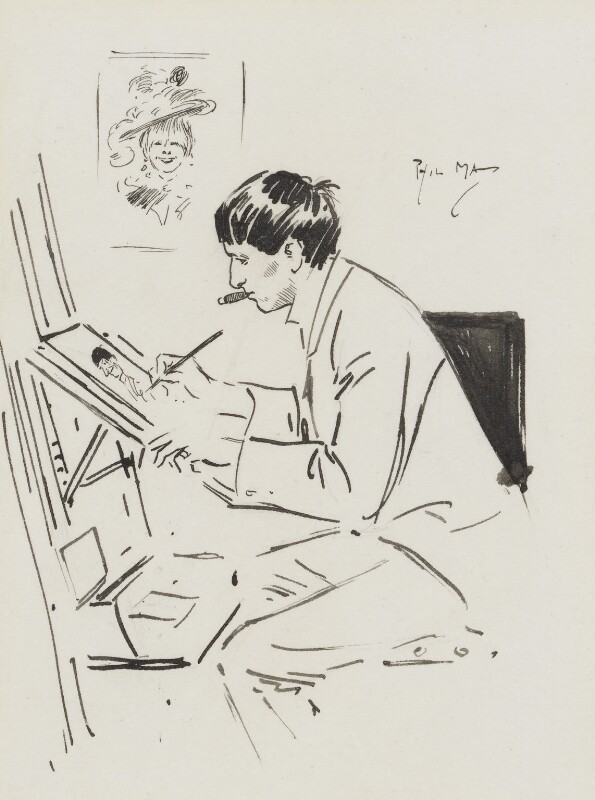 Not a caricature and uniquely serious among his innumerable self-portrait sketches, this drawing was probably specially produced to illustrate the article Marion Harry Spielmann was writing on Phil May for the 1894 volume of the Magazine of Art. It was also used for Spielmann’s obituary of May in this magazine in 1904. [1]

May shows himself at the easel, penning one of his own grinning profiles, overlooked by a typical ‘’Arriet’ cockney sketch on the wall. The characteristic jutting lower jaw and pudding-bowl haircut, visible in photographs, have been minimized. His frame is suggested in a few pen strokes and the pose of the hands merely outlined. May’s method was to start with very detailed pencil studies which he pared down to essential lines for publication: ‘It was as though he put his extraordinary amount of observation into a sieve, and riddled away everything but was essential to his purpose. Concision of statement was characteristic of his mind.’ [2] There are some traces of the preliminary pencil drawing on NPG 3038.

For Phil May's letters to Spielmann, with offers of drawings and requests for financial help, see the Spielmann Collection, John Rylands University Library, University of Manchester. [3]

Given by Marion Harry Spielmann, 1939.