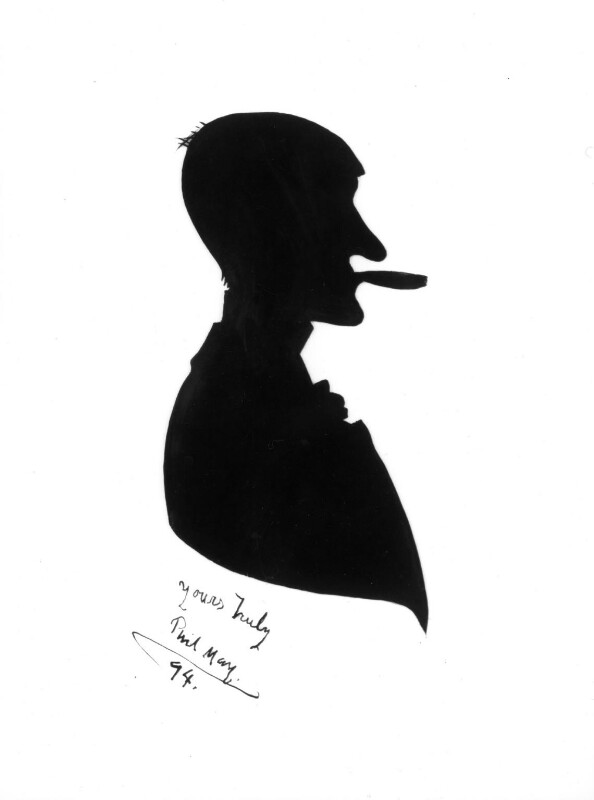 Inscr. lower left: ‘yours truly / Phil May. / 94.’
Small label removed from back of original frame (now in NPG RP 3941) inscr.: ‘Portrait of himself sketched by / himself, whilst visiting the Aquarium’.

The silhouette, painted on a rectangle of glass, was offered as a gift to the National Portrait Gallery by Miss D. Finney of Ladbrooke Drive, Potters Bar, in June 1955. An old label removed from the frame refers to May visiting the ‘Aquarium’. The Royal Aquarium (on the site of present day Central Hall, Westminster) was a vast hall decorated with fishtanks and tropical plants, offering entertainment ranging from skating to bars and vaudeville theatre. [1] One of the popular entertainers was the hypnotist ‘Professor’ T.A. Kennedy, [2] of whom May also made a silhouette, formerly owned by the collector Desmond Coke: ‘…years ago in the Edgware Road I had the good luck to find three painted silhouettes […] two, representing [May] himself with his perpetual cigar and Kennedy of the old Aquarium instinct with the showman’s suave assurance’. [3]

Phil May’s work as a silhouettist is expert and relatively unfamiliar. The drawings are reductive, stylized extensions of his usual pen and ink work. Coke particularly admired them, for although there had been a revival in the fashion for profiles, the modern ones were often just ‘snipped out paper’ and (he thought in 1913) much inferior to those painted by May in the traditional manner. There are three further May silhouettes in the NPG collection: of Sir John Dugdale Astley (NPG 3173 and NPG 3173A) and the Marquess of Queensberry (NPG 3174), both personalities from the sporting world, in whole-length poses dated 1889.

1) The Royal Aquarium, Westminster (1876, renamed the Imperial Theatre, demolished 1903) was a ‘combination of winter gardens, music hall and variety performances, side shows, restaurants, and what not and it is claimed for it that at no other place in the world can so many sights be seen’; The Queen’s London: a Pictorial and Descriptive Record of the Streets, Buildings, Parks and Scenery of the Great Metropolis, 1896).
2) See ‘Kennedy the mesmerist’ poster, Evanion Coll., BL, London, Evan.388.
3) Coke 1913, p.221.
4) Hummums was a hotel in Covent Garden; see Mayne 1970, p.86 and fig.65 for other Covent Garden silhouettes made by May in 1894.

Head-and-shoulders, profile to right with cigar.